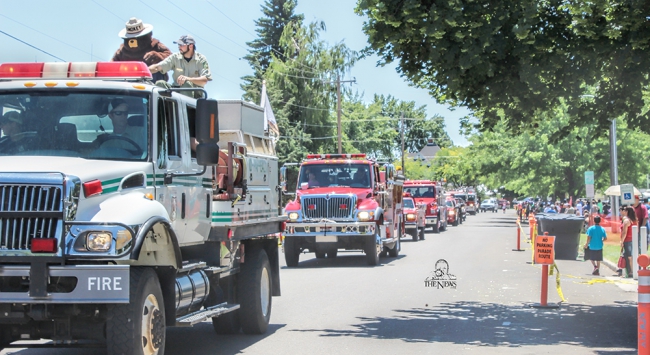 A big thank you to the Parade Committee for coming up with the 2016 parade theme, “Red, White, Blue, & Fiddlin’, Too”.  Parade applications may be downloaded from our website:  www.fiddlecontest.org or picked up at the Fiddle Contest Office (414-0255).  The completed applications are due no later than, June 22, 2016 at the Fiddle Office at Weiser High School. There will be NO Sign-Ups at the parade start.
Line-up will take place at Weiser High School for all participants except for the Equestrian entries and they will line up in the vacant field on the east corner of Indianhead and State Streets.
2016 GRAND MARSHAL

We are honored to present the 2016 Parade Grand Marshal, Miss Julie Chandler. Anyone who has been around Weiser for a few years will remember Frank and Nancy Chandler’s eldest daughter, Julie.
Julie Chandler graduated from Weiser High School in 1971 and was off to college at BYU to become a teacher.  She taught in Germany then returned to teach in the Weiser School District until her retirement in 2014.
Julie is a very busy lady.  She is involved in her church, the Weiser Historic Preservation Society, Delta Kappa Gamma, and the Friends of the Hospital.  For over 25 years she served as the County Fair exhibit hall supervisor and a 4-H leader.
Miss Chandler loves to read, journal, scrapbook, sew, and crochet.  She is well respected throughout the community as the “costume lady” for the musicals at Weiser High School and Weiser Jr. High School.
We are honored to say “Thank you, Julie Chandler, for your many contributions to our community.”