A Winter Tale by Rick Graham 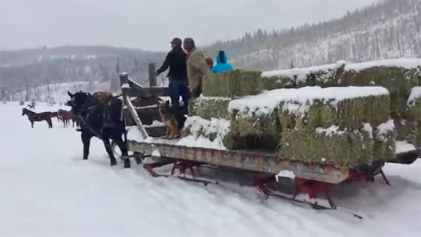 Share By Elsie Coburn: A Winter Tale By Rick Graham

When Homer Wiggins was still among us, he had a story about many things that happened in  the Middle Valley back during the early homestead times.  He told me that as he was growing up, January and February were the snow months and they had a lot of wind.  One thing we could agree on was that things could change in a hurry.  You may leave the house during a monsoon, or blizzard, in the morning, and by noon be down to shirt-sleeves wishing you had a summer hat.
Homer told me of an event when he was a fairly new minted teenager. He said that it seemed to him they were still in the throes of a tough winter when one morning his Dad wakes him about half an hour before the usual time and tells him to get dressed as they had to get the cows fed, and no time for breakfast, just hurry up and get out to the bobsled.
Homer gets on his cold weather garb and steps out into a typical winter morning.  His Dad is telling him to step lively as he was in a hurry.  Homer says his Dad isn’t saying why, and he had no inkling as to the rush.  He no more than steps onto the bob sled and his Dad has ‘em into a stiff trot going to the feedlot, and he’s hanging onto anything he can reach to stay aboard.
When they get to the gate, his Dad says for him to not bother shutting it, just throw it back, which he did, and as his Dad goes by with the bobsled of hay, Homer swings aboard, grabs the pitchfork, and starts pitching the hay to the cows.  The dog is keeping the cows back so as to prevent any getting under the sled as Homer is pitching the hay while his Dad insists he go faster.  Homer still has no idea why the hurry, but as he’s throwing the last off the sled he notices it’s gotten a lot warmer, and the wind is much warmer.
They head for the gate, and when there his Dad slows the team to a walk and Homer swings off to close and fasten the gate.  His Dad doesn’t stop, and Homer has to run to catch up and get on the sled.  He no more than landed and his Dad laid the bud to the team.  They were going full out.  Then it all comes to him the why of the hurry.  He says the team and the front runners were in the snow, the back runners in the mud, and the dog running behind was kicking up a dust.
Hope you enjoyed a Homer story.  His stories will live with me until the end comes.    Rick