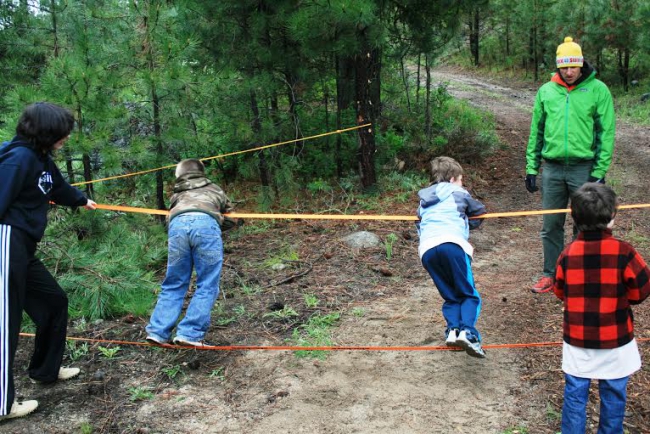 Neither snow nor rain nor gloomy clouds could stop the eight courageous climbers from attacking the boulders at Camp Pinewood in McCall, Idaho on Saturday, May 21.  On a day that saw rain and snow less than an hour before the event started, turned into a dry morning for the climbers as they were joined by numerous volunteer climbing coaches, three McCall fire companies and even the mayor of McCall, Jackie Aymon.

The event was organized by Courageous Kids Climbing, which provides free opportunities for children with special needs, physical and intellectual, to experience the various forms of rock climbing.  In addition to climbing on the boulders, the kids were also given the chance to try to walk across a slackline.  McCall Fire and Rescue positioned a fire engine close to the field so that the kids could get a firsthand look at the rig.
One of the more popular events was getting transported to and from the bouldering area on UTVs.  So popular in fact, that many of the kids asked for and received extra rides up and down the trail that paralleled the Payette River.
Half a dozen local rock climbers volunteered their time to coach the kids and were joined by several McCall firefighters under the direction of Firefighter Jonas Bean, who also helped mentor and coach the kids.
It was apparent that the kids loved their coaches as several kids could be found wrestling with lead coach Sean Gould.  Gould put up a good fight but the kids were just too much for him.
Courageous Kids Climbing Event Coordinator Jeff Riechmann said, “We watched the weather all week and saw that it looked like it was going to rain.  But we never gave up hope and told everyone that we would make a final decision at 10:00.  We had a Plan B up and running with the Yellow Couch youth center.  Then at 10:00, Sean Gould announced ‘let’s climb.’  The

UTVs were loaded with climbers and headed for the boulder field.”
Because of concerns about parking on Deinhard Lane, Our Savior Lutheran Church allowed the participants to park in their parking lot and even opened the church so that the climbers and friends could use it to get out of the weather and stay warm until the event started.  The church even set up a display for Fathers In The Field as they seek out fatherless young men in Valley County that they can mentor.
Added Riechmann, “Our goal is to make at least one of these special climbers smile and feel good about themselves.  I think it is safe to say that we were very successful.”
Courageous Kids Climbing next travels to the YMCA Camp at Horse Thief Reservoir on June 11th and then heads south to Bakersfield, California before taking a break for the summer.  This fall finds them returning to Boise and Bakersfield along with a first time trip to Driggs, Idaho.  For more information on Courageous Kids Climbing, contact Riechmann at jeffriechmann@cs.com or visit their Facebook page Courageous Kids Climbing.