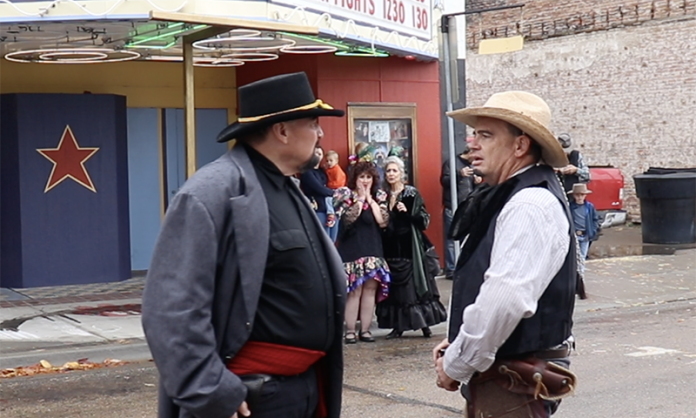 The Illustrious Onion Skin Players had quite the journey for the gun fight to happen for the chili cook off. This group of very talented individuals doesn’t mind a challenge from time to time. It was all made possible by a member of our community who is wildly passionate about western gunfights, donations, and barely cooperative weather.

Andrea Dovner is a professional actor who is very zealous about theater. Andrea moved to Weiser from Florida and is in The Illustrious Onion Skin Players. In fact, she’s on the board and has been for a couple of months. When the suggestion of a gun fight came up as entertainment for the cook off during a meeting with the Weiser Chamber of Commerce, Andrea said that that surprised her because the Onion Skin players are known for melodrama. Then she was asked to write the script for it. She mentioned that she didn’t have experience with writing scripts, so when she was asked to write one, she was determined to create something hilarious for the community.

Andrea had a guardian looking out for her, because Norman had approached Alex asking about the gun fight. Andrea received Norman’s number from Alex and realized that she had invited him over for dinner a couple of weeks back. Turns out Norman has worked with the best of the best in film stunts that involve western gun fighting.

Norman had the experience to help Andrea create a very authentic western gun fight. Every detail was talked about and put to action. From the script to the costumes, Norman was involved. During rehearsals Norman showed the main actors how to fall, where padding should be: like the back and the knees, so when they fell it would look real.

There was discussion about getting bales of hay to be used as props, Andrea said “I didn’t realize that they weighed 100 lbs! Last minute we had a donation of six bales of straw! It all fell into place!”

On the day of the cook off, the members of The Illustrious Onion Skin Players who were participating had rehearsal before the event. There was quite a bit of rain, and the guns didn’t fire well the first couple of times. Regardless of this mishap the show went on! At the end of the second gun fight Norman would educate the children about guns, and even showed them that the gun that he was carrying was a black powder gun.

With the help of Norman, the donation of straw, and of course the amazing Illustrious Onion Skin Players the members of the community were entertained, educated, and didn’t mind the slight drizzle that weather brought.