Joe Qualls; All Work and No Pay 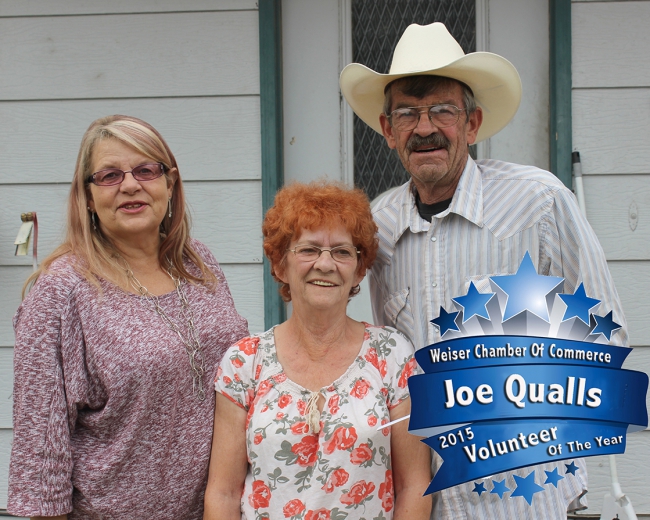 By Marsha Woods
A man like Joe Qualls does not ask for much. A happy family, a chance to contribute and a community free of adversity.  He is doing his very best to make that happen!
Joe grew up in Midvale, Idaho in a family that instilled the principles within him that carries on today. Being raised in a small town, he was exposed to the simple values that only a tight knit community can instill. It is why he does what he does!
Graduating from Midvale High School in 1971, it took awhile to discover what he wanted to be when he grew up.  Joe enlisted in the Air Force on July 31, 1974. He spent four years, 8 months and sixteen days serving his country, but who is counting? Upon his discharge, he rushed back to the life he craved, his home! He seemed to know innately that wherever life took him, he would always find his path back.

Midvale provided Joe with all that was important.  He married his best friend, and partner of 34 years, Phyillis Grothaus. Together they raised their own version of the Brady Bunch.  Five boys and one girl.  Joe is gleaming  proud of his “basketball team and single cheerleader!
His parents, O.C. and Shirley can be credited with his spirit of giving.  His father helped develop the Midvale Fire Department, as well as working on the Rodeo Board. It was he who enticed Joe into a life of service.
Joe also speaks reverently of the other people in his life that induced his alacrity.  He names Pat Douglas who encouraged his involvement in the benevolence of the Elks. Carol Fausett fueled the fire with his efforts in the building project for the new Senior Citizen Center.  It was Jack Walker who prompted his enthusiasm for the Weiser Valley Round-Up over ten years ago.  Joe has not taken off his cowboy hat since.
Joe’s ambition was further stimulated when the late Art Correia invited him to join the Idaho Watershed Advisory Board.  He was influential, becoming Vice President, in the development of the Total Maximum Daily Load Program, (TMDL) which identifies problems on the watershed and creates solutions to resolve those problems.
Joe had a career with the City of Weiser, amongst others; however, his true calling seems to be changing the world one step at a time. He’s just a guy who can’t say no!  He says that each project strengthens his resolve in the things that touched his life. He simply wants to make a difference!

Joe is just a man who can’t say no!  He and Phyllis own a Property Management business; he works part time for John Huggins construction;  and owns a Karaoke  business” Just For Fun,” as well as volunteering  for Angel Wings Network.”  In the meantime, however, besides his wife and children, his other “true love” is the re-invention of the Weiser Valley Round-Up.
Joe’s heart directs him to the Fred Hust Arena whenever possible.  He is directed by his passion to “bring back the old days” when rodeo was the catalyst of excitement for the Cowboy crowd!  His personal goal is to improve the grounds and let people experience the exhilaration of what once was.  He solely has risen private funding to add covering to the grandstands. As a board member of the Idaho Cowboy Association, he won’t quit until it is done.  His eyes shine with the prospect of his Great Grandchildren enjoying what he, himself appreciated as a child. A legacy to be sure!
Dr Seuss seemed to be describing Joe Qualls when he said, “Unless someone like you cares a whole lot, nothing is going to get better. It’s not!” Joe Qualls is going to make it better.