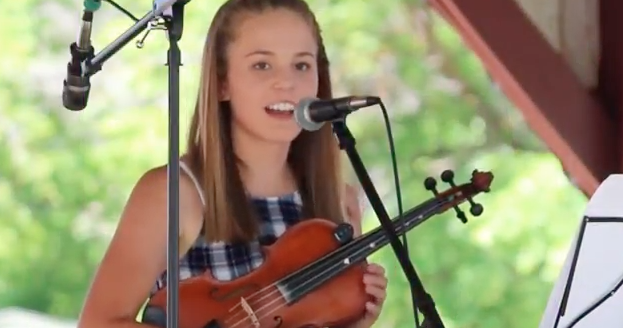 Weiser is a town that is certainly blessed with amazing youth. We have children and young adults who do incredible things to help serve, guide, and lead in many aspects in our community. One young lady, Miss Kali Branstetter, is one such youth. Her acts of service have not gone by unnoticed by our community, and she is now being recognized as Seven’s Hero this July 5th, at 10:00 P.M! Kali was interviewed by News Channel Seven’s Maggie O’Mara.

Kali, a young lady with many abilities, loves to share her talents of music, acting, dancing, and sports with as many people as she can! When not giving her absolute best in the classroom as an exceptional academic, she is actively pursuing her talents by playing in sports, taking acting classes, participating in plays and musicals, and teaching fiddle lessons to younger children. Oh, and let’s not forget her acting and modeling career, garnering her some commercial time and her upcoming performance in her first movie role!

Yes, Kali is a young lady swimming in talents and has plenty on her plate! Yet, still she finds time to advocate something that is dear to her heart. Kali is the creator of the organization “In Harmony: Helping America’s Heroes Through Music.” Through this cause, she performs with her fiddle throughout the Treasure Valley, spreading her message of love and appreciation for those who have fought and sacrificed for our country. She donates all the proceeds of her performances to the Gary Sinise Foundation, the Semper Fi Fund, and the Wyakin Warrior Foundation.

Kali’s family has had a long history of veteran’s as her great grandfather served in the Marines in WWII and her grandfather in Vietnam. Her hero, and the inspiration for her organization, however, is her big brother Kenneth Branstetter II. As an Aircraft Fire Rescuer, he was injured while responding to a casualty evacuation when the fire truck was cut off and they rolled into a ditch, leaving him partially paralyzed on one side of his face.

Kali said, “I love my brother. I just wanted to find a way to show him how much he means to me. And it got me thinking about the other people who go off and sacrifice so much for us! There was something more I could do to say ‘thanks.’”

Kali further explains her feelings for her cause on her webpage. “The effects of war tug at my heart. I see it in my brother and others. I feel that we owe all those who have sacrificed so much. It doesn’t need to be a lot: A hug, a handshake, saying ‘Thank You’, listening, volunteering…the list goes on. I love music! If I can play my fiddle and make one Veteran smile, then I’m doing what I set out to do. Ask yourself, ‘What can I do?’”

Thank you, Kali, for being a truly amazing example to us all! You are not only Seven’s Hero, you are a hero to the little town of Weiser you serve, and to the VATS, as well! Congratulations and keep that beautiful, giving heart beating strong!

For information on upcoming performances to show your support, please visit Kali’s webpage, inharmonyhelpingamericasheroesthroughmusic.com, or her Facebook page! Remember to catch Tuesday night at 10:00 PM on News Channel Seven!