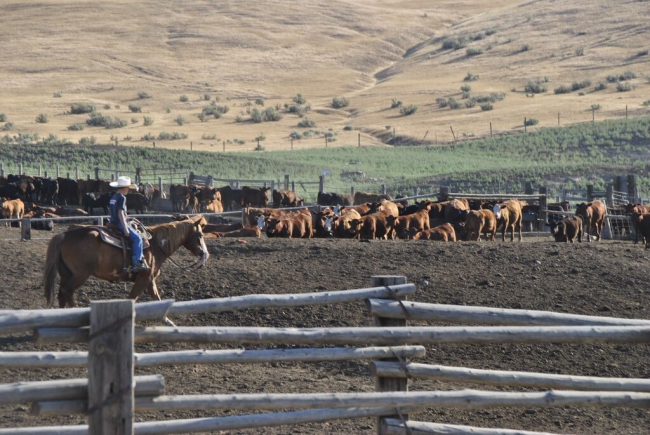 By Marsha Woods
With the ever changing economics in agriculture, it is not an easy task to carry on a family tradition Bruce and Julie Kerner, owners of Kerner Cattle Company are determined not to let that happen.
The heritage began with Bruce’s grandparents, who, seeking a way to support a family of 15 came to Idaho from South Dakota during the Dust Bowl days. Settling near Shoshone, Idaho, ranching became a way of life. Bruce’s father, Milton, the youngest of the brood, along with two other brothers, realizing that, they too, had families to consider, started investigating new avenues for success. Milton and his wife Lola, found the opportunity in Weiser. Purchasing an almost uninhabitable farm, known as the Galloway place, they proceeded to reinvent the original settlement on Weiser River Road. The Galloway’s were one of Weiser’s first settlers; the property has only changed hands once in 140 years.  Milton toiled to clear his property which proved to be excellent for cattle raising; thus the legacy began.

Bruce was a part of it all from the beginning, and   Julie, having been raised on a Hereford ranch south of Weiser, had aspirations of taking advantage of living an idyllic life on a cattle ranch. Entering college at the University of Idaho in the ‘70’S, The Agricultural industry was at its peak. When they graduated in the ‘80’s, things had changed drastically. Pooling their intellectual resources, with goals to join the family cow-calf enterprise, they realized that in order to do so, they needed to add something more to the pot. The idea of the addition of adding a feedlot resulted.
Forming a partnership with Gary and Marge Chipman in 1987, KC Feedlot became a reality with the purchase of 40m acres of land purchased from Bruce’s family.  The partnership proved to be a lucrative decision. The Kerners’s bought out the Chipman’s interest in 1999, forming Kerner Cattle Company. They have been running the enterprise, with the help of their 3 children ever since.

It is not an easy life; one that requires 24 hour a day vigilance.  Bruce says that the day to day obligations are “all consuming, “but the long hours are worth it. The benefits of partnering with their children; teaching them the value of farm life is well worth the exhaustion.  All 3 children have grown up, working alongside their parents on the 3000 head cow-calf operation, operation as well as aiding in their grass yearling duties.  It is a 365 days a year responsibility, but teamwork within the family makes it almost fun.
The Kerners take it all in stride.  It is all about family pride. Their children are integral part of the enterprise.  Only the youngest is still at home, each of their children feel the pull of home and return to help out whenever possible.
The goal of the Kerners has always been honesty. Joining the Idaho Cattleman’s Association facilitated the legal aspects of the industry.  Wanting to “do things right, “the ICA has been a great resource in directing them with CAFO and EPA

regulations, as well as waste and resource management. They realize that paying ones dues is an education resource.  Bruce says that surrounding himself with others in the industry has helped him to understand the intricacies of every segment of understanding all of its aspects.
Bruce and Julie have witnessed a myriad of significant changes in their years of toil. The changing cattle market is the most challenging, but by vigilance and observation, they continue to persevere.
It is about all about loving what they do that directs them to get up in the morning. Julie says that life is never boring.  Each new day is a new beginning. She loves calving season, which usually starts in the cold weather month of February, when birthing conditions are from perfect. It is then that she gets to witness the beauty of bawling babies and witnessing their growth.
Bruce and Julie are relentless in their quest to set an example for their kids.  It is the preservation of a place for their kids to come home to that keeps them motivated. Not only are they highly involved in 4-H, but, moreover they have hosted teachers in Ag. Classes, and directed instruction to students from school’s Idaho History classes.
The Kerners never rest.  The only breathe freely when their volunteer duties to the ICA, Weiser Cattleman’s Association, Weiser Athletic Programs and checks that have been written to the Uof I Steer a Year Program are in the mail.  The Washington County Fair has been a beneficiary of the Kerners generosity as livestock buyers for 27 years.
Bruce and Julie Kerner believe in the good life.  They are dedicated to the meaning of tradition. The work diligently to continue the legacy that began with their ancestry.  They embody the sanctity of Agriculture and its offerings to further generations.  The inheritance that they will pass on to their children is that of value.  For the rest of us, they are an example.