Kerry Nyce; Retired but Not Quitting 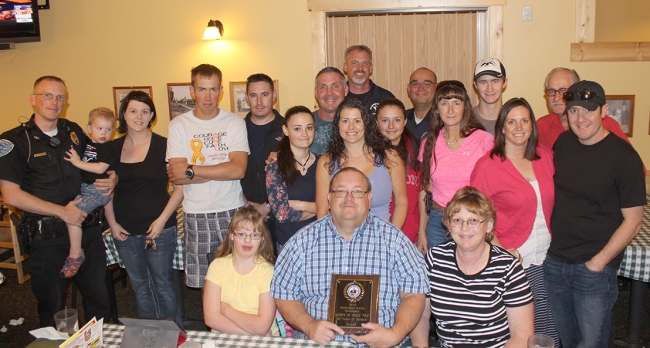 By Marsha Woods
A man with a propensity for compassion and an innate sense of altruism, Weiser’s Kerry Nyce may have may have retired from the Ambulance District, but will never stop caring!
Kerry may not have set out to become a First Responder, but while working for his father at Stuntz Lumber

Company in Payette, he was invited to join the Fruitland Fire Department by Dennis Campo in May of 1980.  His career as an Ambulance attendant began in July of 1983 when he was hired by Val Hemingway of United Ambulance Service. Kerry, being the ambitious family man, liked the idea of diversity, therefore joining the Payette City Police/ County Sheriff office as a dispatcher/jailer/ patrolman in 1985.
Something about being a “cop “just didn’t fit in with Kerry’s sense of humanity. He was hired by The Weser Ambulance in August of 1985. Dedicating his life to that of others seemingly was his forte. He joined Weiser City Fire Department as a Training Officer under Chief Bud Fisher in 1989, continued to work for the WAD, completing a Paramedic Program in Advanced Life Support (ALS) in 1996.
The desire to spread rapid assistance in time of need, Kerry, with the cooperative efforts of four partners, created Treasure Valley Paramedics in Ontario, Oregon in 2004.

Seeing the worth of a man who has a  commitment to the betterment of community, then Mayor Jon Walker appointed him to the position of part-time Fire Chief in June of 2011; current Mayor Diana Thomas, recognizing his worth, re-appointed him in September of 2015.He continues to serve behind the desk at the Firehouse today.
Kerry Nyce has seen a lot in his career; given up his time away from home; faced situations that required quick decisions and lost a lot of sleep in the

process.  He has worn numerous hats; however Kerry considers his greatest accomplishment as that of his family! He met his wife of 32 years, Vicki Wilson in Payette in 1981 and she became his best friend. The couple was married in 1983.  Of all the awards that Kerry has earned, his children are his greatest reward. Son Gregg, now 25 and living in Nampa was born in 1990. His little Sunshine, Emilie, now 14 and a student at Weiser High School entered his world in 2000.  His family is why he looks forward to each new day!
If one does the math, Kerry’s retirement from the Weiser Ambulance district on September 7, 2015 adds up to 30 years and 1 month. If one includes 3 different terms as Interim Supervisor, the total sum of it all is an astounding 35 years and 1 month of dedication!
Most would think that man whose life occupation consumed the majority of his waking hours would take time to rest.  Kerry’s penchant for homanity leads him. He was instrumental in the development of the Harmon Killebrew Miracle Field in Payette, a project very close to his heart and where he spends numerous hours volunteering.  He is also deeply involved in the Knights of Columbus, a member of the Weiser School Board, as well.  When does this man sleep?
Kerry Nyce may have retired from the Weiser Ambulance, but he will never take off the uniform of kindness!