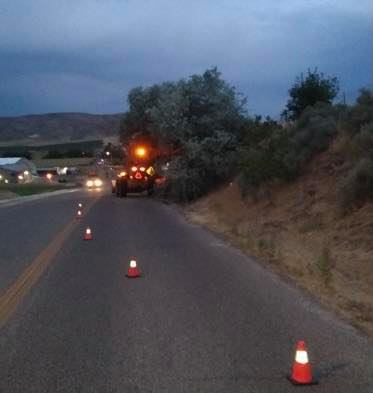 Microburst on Wednesday night had trees down and a carport flipped over to the other side of the home. Pat Malay from The City Of Weiser quickly pushed this large tree off of Indianhead Road. Weiser City Police Sargent Singleton witnessed pieces of roof coming towards him while he was at a stop near Legends On Main. He also shared that even with the strong winds and some property destruction, they had no reports of injuries.The City officers and County Deputies responded to reports of downed lines, assessing safety concerns and how to route city resources for maximum efficiency of emergency services during a high call load.Dispatch took a heavy volume of calls and were able to maintain peak emergency coverage in a short period of time.