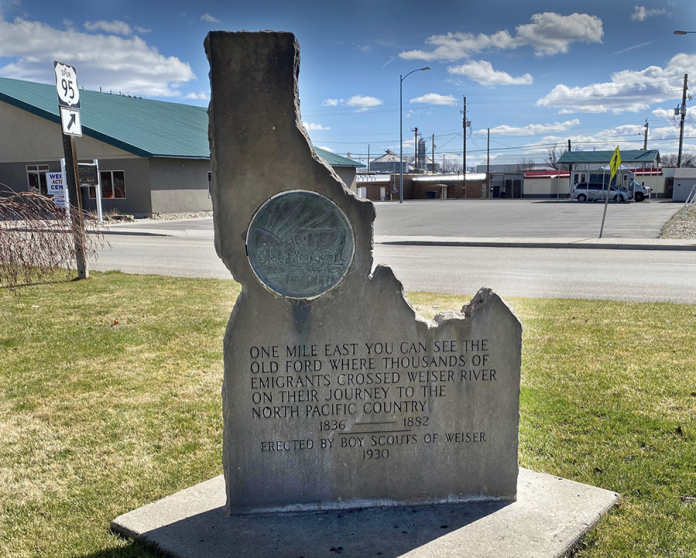 The large monument is located in the triangle park between Legends on Main Street, 114 E. Main St. and The Weiser Senior Citizens Center, 115 E. Main St. The smaller one is located by the northwest corner of the Cove Road Bridge.

These comments are the results of my research and involvement in a Boy Scout Eagle project in the 1980’s.

When my family moved to Weiser in 1978, we recognized the monument. Growing up in southwest Idaho, we are aware of numerous similar monuments. Upon closer review, I noticed that the round plaque was missing. A few years later, I was asked by Boy Scout Greg Kelley for ideas for an Eagle Service project. Greg agreed to research the monument’s history, replace the missing plaque, erect another monument at the referred-to location (Cove Road bridge), and publish his project in the Signal-American. (Issue dated August 23, 1984.)

The large monument states: “One mile east you can see the old ford where thousand of emigrants crossed Weiser River on their journey to the north pacific country. 1836 —1882 Erected by Boy Scouts of Weiser 1930”

Immigrants and other Americans desiring to carve out a place in the new western frontier, departed from Missouri along what was named the Oregon Trail. It is estimated that over 400,000 people embarked on this adventure. Fur traders blazed the trail in the early 1800’s. Immigrant wagon trains actively used the trail from 1836 through 1882. Many books and movies have given us a glimpse of this journey. Travel on the trail began to decline when the Transcontinental railroad was completed in 1869. As the 100-year anniversary of the first wagon trains headed to the West coast was approaching, many historians began discussing how to celebrate this epic adventure in our nation’s history.

In 1926, led by the persistence of Ezra Meeker, an 1852 Oregon Trail immigrant himself, the US Congress acknowledged the formation of the Oregon Trail Memorial Association and the authorization of minting a commemorative coin. Also at this time, Dr. Minnie Howard, Pocatello, Idaho, was communicating with Washington DC officials to mint a commemorative coin to help finance the local preservation work of Fort Hall, a historic fur trading post that was on the Oregon Trail. The OTMA was created to coordinate the centennial celebration by providing historical information, assisting states in designating marker/monument locations, encouraging local involvement, and designing and marketing the Oregon Trail Commemorative coin to provide funds to accomplish this remarkable endeavor. The Commemorative half dollar coins (see below) provided some of the funds needed. The Association contracted with James Fraser (who created the design for the buffalo nickel) and his wife, Laura, to design the commemorative coin. The coins were minted from 1926 to 1939. The coins were sold to the OTMA for sale to the public. After
reimbursing the mint for the half dollar per coin expense, any additional sales proceeds provided funds for the Trail’s centennial plans. The initial selling price was $1. The coins continue to be highly collectable and are available at many coin stores and through eBay.

Most monuments/ markers built in each state included the identical Trail seal – a replica for the obverse side of the Commemorative coin. These bronze discs were supplied, at cost, by the OTMA.

This undertaking was not limited to areas west of the Mississippi; individuals and organizations on the east coast sponsored a monument by raising funds to construct the individual project. Boy Scout Troops that were active in communities along the Trail and others throughout the country, adopted individual monument and had their sponsor’s name inscribed on it. Many east coast Scouting Troops traveled to their adopted monument when it was completed.

The Trail monuments scattered across Idaho were constructed in the shape of the State and were fashioned with similar designs, included the seal that was copied from the coin’s obverse side. Each monument is inscribed to identify the historic spot to be marked. Many of the original markers have been damaged, destroyed, or moved. As Idaho has grown in population, and with the passage of time, recognition and interest in these monuments has all but disappeared.

The Weiser Monument-
The Weiser American reported on August 28, 1930, that a representative of the Oregon Train Memorial Association came to Weiser to present 250 of the Commemorative coins to the Scouts from our three local troops. The coins were purchased for face value ($.50) and sold for $1.00; with, $.10 given to the nation organization, leaving $.40 to be used for defraying the cost of the monument and its erection. The monument is of Idaho brown sandstone, which was taken from a quarry near Boise. It was reported that Weiser was the first town in Idaho to complete this project. On September 26, 1930, a community ceremony was held in front of the Washington Hotel to recognize the monument. The ceremony included local Boy Scout Troops sponsored by the Knights of Pythias, L.D.S. Church, and the Weiser Kiwanis Club. Mayor Frank Gwilliam and Judge Frank Harris spoke on the significance of the occasion.