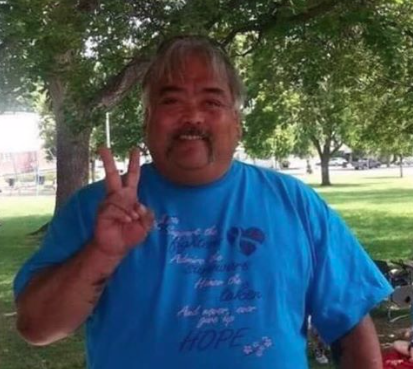 Robert “Bobby” Ray Turner, 53, of Weiser, Idaho, died February 5th, 2019 surrounded by his family and closest friends.  Bobby was born January 4, 1966 at Fort Lewis, Washington.  He was the baby that never should have made it; Born prematurely at two pounds with a hole in his heart, his siblings remember his early infancy spent in a shoebox by their mother’s bedside.  He made it!
His family moved to Weiser, Idaho in his toddler years.  At age four, he met his forever friend and soul brother Joe Ramirez while attending Head Start.  As a boy, Bobby got himself into countless shenanigans most involving Joe and devoted childhood friend Jimmy Searle.
Riding bicycles together was easily one of the fondest memories the boys have.  Bobby was determined he would be the first to land the jump from a 6’ loading dock.   One day Bobby approached Joe running home, “I did it!” he exclaimed.  Joe can very clearly remember seeing Bobby’s face, bloodied and beat up.   He could see Bobby’s front teeth through the split in his upper lip that would require plastic surgery the same day.  There was only grit and excitement in Bobby’s voice, though – he did it!
The boys frequently played by the rivers in the Weiser valley, taught themselves to hunt before they ought to, enjoyed fishing, and often found a little mischief.    Throughout school Bobby was also involved in football, enjoyed weight lifting, and even amateur boxing.  However, Bobby discovered his first true passion with his friends at about age eight:  pigeons.
Bobby enjoyed the thrill of catching wild pigeons in childhood and progressively worked his way to maintaining up to 100 birds in his adult life.  Bobby was truly intrigued by the bird and it’s abilities.  He traded rare breeds, was known for his “rollers,” pigeons that simultaneously seem to summersault in the air at the clap of his hands, and “homers,” birds hardwired with navigation tools.  He enjoyed sharing his knowledge and skills about the hobby of pigeons with the members of local pigeon clubs, where he also served as a leader.
A much more radical act of service began after Bobby graduated with the Weiser High school class of 1984 and enlisted in the US Navy the same year.  One of the highlights of his Navy service was completing the BUD/S (Basic Underwater Demolition/SEAL) training.  He really did it!  This accomplishment is another example of his determination and will.  Bobby served in Desert Storm in 1990 on the USS Copeland.  He also extended his military career into the US Army Reserves until 1992.
During this part of his early adult life, Bobby met Trina Rast and married her in a sweet ceremony in Weiser in 1987.  The couple would be parents of two beautiful children; Tommy was born in 1987 and Sandra in 1991.  The family lived in Weiser.  This location, home of the National Old-Time Fiddle Festival and traditional bikers that would flood into town every summer, exposed Bobby to motorcycles, specifically, his love for Harley Davidson.  His desire to ride hard, risk big, live free, and his strength to power through adversity will be remembered as his legacy lives through the generations.
In a final act of service, Bobby chose to be a donor and his corneas were transplanted into a recipient shortly following his death.  It was a selfless act of kindness and brings a small bit of peace and closure to his family:  In addition to his son Tommy (Nina) Turner and daughter Sandra Turner, Bobby is survived by his brother William Turner Jr., brother Mike (Janet) Turner, sister Janette (Rick) Clemmons, and sister Susan Slyter.  Bobby leaves behind five grandchildren, cousins, nieces, nephews, and his extended family of friends.   Bobby is preceded in death by his sister, Sandra Turner, his mother Eiko Kudo-Turner, his father William Turner Sr., and his grandparents.
A memorial service will be held to honor Bobby’s life at Thomason Funeral Home, 221 E Court St, in Weiser, Idaho, February 23, 2019 at 1:00pm.