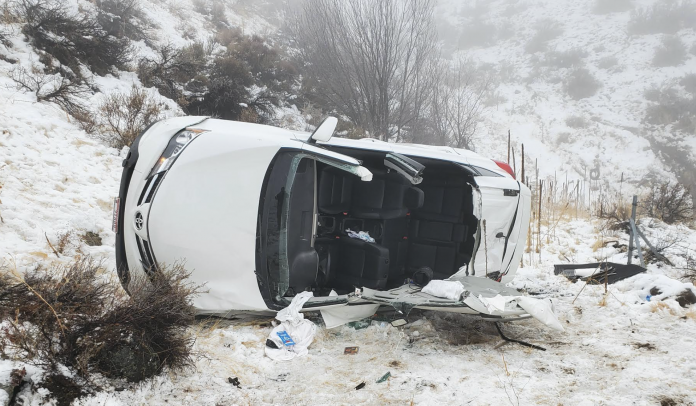 On November 16, 2020 at approximately 1:00 PM, A Washington County Sheriff’s Deputy was on Patrol in the Cambridge area when dispatch notified him of a one vehicle rollover on Midvale Hill, he was advised that the accident was around milepost 101 north of the rest stop. Midvale fire and Ambulance were also notified and responded to the scene. The deputy arrived on scene and found a single vehicle (2014, Toyota Rav 4) below the guard rail on the south bound side of the highway laying on its drivers side facing north. The vehicle had been traveling south and left the road way north of the guard rail and went down into a ravine were it rolled and came to rest.

The driver was stuck in the vehicle and extrication was needed, The Washington County Deputy assisted the fire department with the extrication efforts. Soon another deputy responded to assist and he took witness statements and pictures of the scene. They were able to get the driver out of the vehicle and she was transported to Weiser Memorial Hospital and then life flighted from there. One Deputy then started traffic control and moved north down the hill to get out of the fog and slow drivers down. The fog was very thick through the accident scene and visibility was very low, The other deputy stayed at the scene and the other moved north trying to keep the scene safe until the tow arrived. Woody’s towing out of Weiser arrived and was able to remove the vehicle and we cleared the scene without further incident.