She’s Too Young for a Driver’s License, but she’s doing what??? 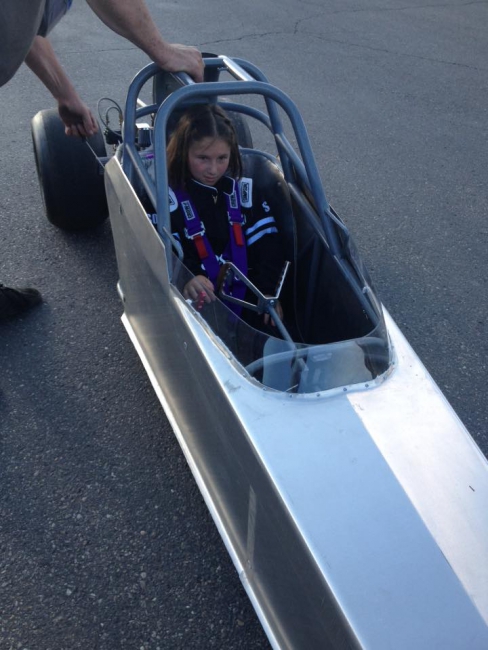 By Marsha Woods
The need for speed starts early with little boys, but sometimes, girls just wanna have fun!
Weiser’s Summer Hughes, 9 year old daughter of Sarah Field and Granddaughter of Dion and Debbie Field, is a girl with her mind on fun and her pedal to the metal! Summer is a race car driver!
Summer’s interest in cars is innate. Her Grandfather, Dion, along with local dragster designer, Dan Tuttle, began building the car that she now drives in 1999 for her older Uncle.  Time and circumstance intervened, until the car finally came to completion earlier this year.  Summer’s mom urged her to get behind the wheel, much to her resistance, but the roar of the Briggs and Stratton, lawn mower sized engine, lured her into the driver’s seat and turn the key.

Her first experience was almost her last when she inadvertently, but almost, ran over her Grandfather! Even that did not deter her; Summer felt the adrenaline and now says that she “loves the excitement! “ Weiser’s answer to Danica Patrick was hooked!
Summer has now experienced her third race at Firebird Raceway in Meridian, competing against approximately sixteen other Junior Dragsters, ages seven to fifteen; five of which are girls.  Victory on the 1/8 mile track came easily her first time out!  Winning with a speed of 44.98 MPH, Summer’s indomitable spirit was ignited.  Her personal best time is 47 MPH, a speed that would merit most of us a day in court.
Summer has always had an unwavering determination for success. At the age of two, she was diagnosed with a brain tumor and was confined to a bed at St.Lukes hospital for two

weeks. Her illness resulted in a loss of peripheral vision in her left eye. Did it deter her? A resounding no! Summer says that her good luck charm is her stuffed dog, “Arf Arf,” who she obtained while confined in the hospital.  “Arf Arf” is strapped in the passenger seat of her dragster when she races; he won’t let her quit!

Speaking candidly, Summer says that her “car is ugly!” She would rather have a pink Jeep! Her uncle has promised her a paint job on her vehicle, so she will compromise for now.  For Summer, it’s not just about the speed; it’s all about being a girl!
So what lies ahead for the littlest speed demon?  Does she want to peruse a career at NASCAR?  Not according to her!  She just wants to study bugs!!
Summer lives up to her name in more ways than one.  Her attitude is all sunshine when she speaks of her family.  She says that her relationship with her Mom is due to the fact that “Grandma created Mom, Mom created me, and that’s why I am who I am!”
Need we say more?