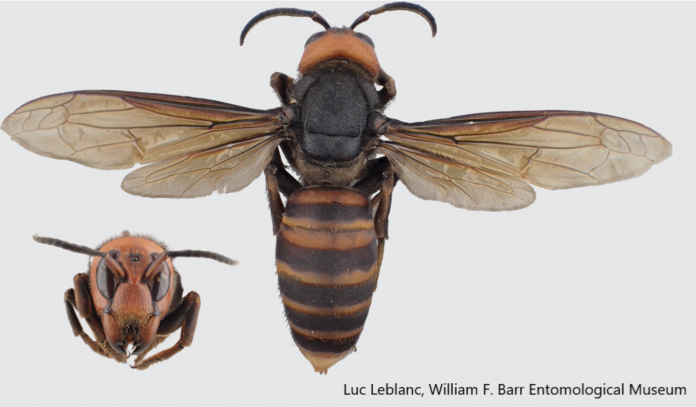 It came silently while we are all distracted with COVID—swooping in on us through the popular press and imagination. The Asian giant hornet (aka “murder hornet”) arrived in the USA last spring surrounded by the mysticism of the unknown and an unsavory reputation for murdering its beloved distant cousins, honeybees. Its predilection to wonton annihilation of honeybee colonies quickly magnified itself into its behavior to humans. While its sting may hurt like murder, it is only lethal if the victim is allergic to bees.

Wester cicada killers certainly do look intimidating. Growing to 1.5 to 2 inches their size easily puts them in the same class as their Asian relatives. Adults emerge in late June to early July. The males emerge first and fly about patrolling their territory. They appear exceedingly aggressive, but it is all bluff. The male cicada killer lacks a stinger and feeds on nectar for its short, two-week existence. The female, on the other hand, is quiet and retiring but will sting if touched or squeezed into a tight place. The sting is painful, but few people are allergic.

Their name comes from their habit of provisioning their nests with live cicadas which are first placed in a coma from a well-directed sting, then deposited in a nest cavity. The emerging larvae feed on the cicadas before spinning a cocoon and going dormant for the winter. Mild winters such as 2020-21 may increase survival and emergence leading to more noticeable populations of this intimidating wasp.

Squish, swat, or not? Your local extension office suggests not. They help keep cicada populations in check, preventing damage to trees for overpopulation of the sap-sucking insects. They may look a little spooky, but they are harmless and help pollinate native flowering plants. The good news is their sinister cousin has not been seen in Idaho!

How do we tell the difference? The Asian giant has a large, solidly orange head with dark, almost black eyes. The thorax or saddle behind the head is a solid deep mahogany—again almost black. The stripes on the abdomen are clean, distinct strips of orange and black or deep mahogany. By contrast, the Western cicada killer has a lighter complexion, with a light mahogany saddle, and a small, triangular head with a mix of mahogany and yellow. The abdomen is striped yellow and light mahogany with the dark stripes widening toward the middle of the abdomen leaving the impression that the color ran backward during flight.