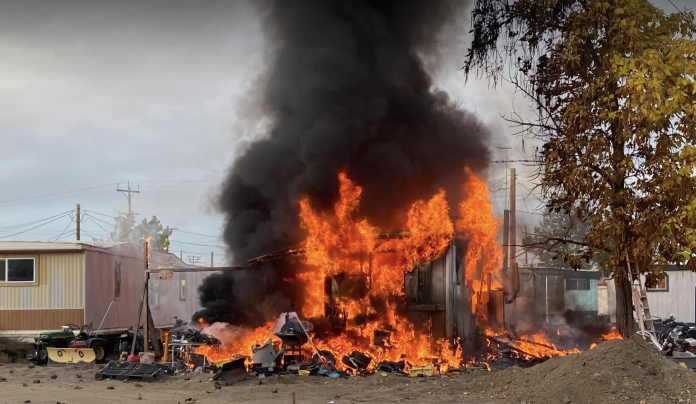 The Weiser City Fire Department was dispatched at approximately 9 AM to a mobile home on fire at Clifford’s Mobile Home Park. The mobile home was fully involved. The occupant was able to escape the fire with no injuries. The Weiser Rural Fire Department was called for mutual aide. Both departments worked together to extinguish the fire. The cause of the fire is being investigated.

Update: The home owner admitted to smoking in his chair fell asleep awoke to heat and smoke tried to stomp it out melted his pajama pants he left the house went to the neighbors house. Fire investigation confirmed same findings found the cigarette under debris with burn patterns leading on the carpet extending to his chair which extended to the rest of the structure with a complete loss, Says Chief Kerry Nyce.

Structure Fire at 1180 W 9th St, Weiser, ID at Cliffords Trailer Park. Total loss of home and car. It was reported that everyone was out and there were no injuries. 9:00 am on Thursday 21st, 2021.