Tammra Van Ness; So Many Hugs! 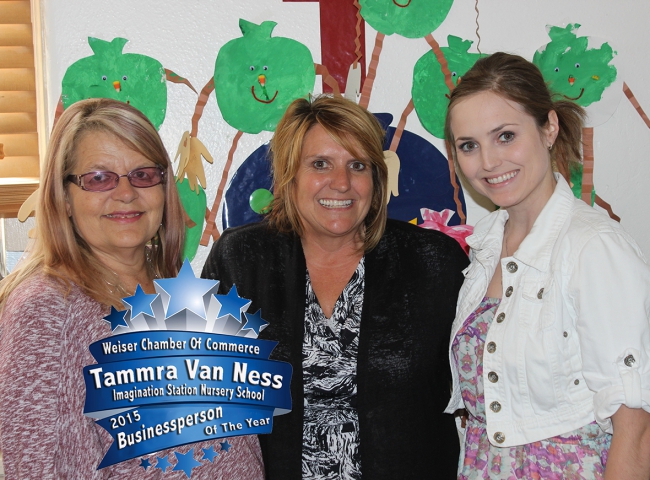 By Marsha Woods
It takes a special person with a big heart and a treasure trove of hugs to dedicate their life to the needs of children.  Tammara Van Ness has been blessed with both.
Owner of Imagination Station Nursery School, Tammara has always had a passion for children. Raising her own

two daughters gave her great joy, but she knew that she had a lot more love to give.
Tammra’s career in child care began when she realized the need for quality services while seeking facilities for her own daughters.  She started a small business in her own home 22 years ago.  Growing compassion for children and for working parents who needed the security of leaving their kids in a safe place, she decided to take her aspirations a bit further.
While continuing to run her own Day Care, Tammara began taking classes in Early Childhood Education, then continued on to get certified in parent-teacher educator in 1999.  In 2002, she became certified as a Director and ran the program for 9 years.

Imagination Station , came to pass 13 years ago from Tammra’s need to do more and give more Starting relatively small, Tammara’s reputation grew until in 2013 she was able to obtain the old Sunnyside School on Hiway 95.  It is a dream that Van Ness never thought could have been realized.
The goal that she has is not about ambition or personal gain.  She strives to provide quality care with a focus on being a “building block, “to the future of a child’s educational success.  Besides administrational duties, she teaches pre-school classes to 3-5 year olds. She recently incorporated the progressive process of the Spanish language into her classroom.  She alters from lessons in both languages every other day.
Tammara says that the goal of that and her staff of 6 strive each day to do one thing. To prepare the young for their future success by building strong skills through free play, a family-like atmosphere, kindness and caring. Hugs are a daily part of the lesson plan.
Tammara’s personal life and the success of her two daughters is a huge reflection of the woman that she is!  Her newly married daughter Katie (Gaskill) has joined her mother in the business as Director after graduating from the College of Idaho in 2011. Younger daughter, Andrea is a Business Analyst for Southern Wine and Spirits in Nevada since graduating from the University of Idaho. Both girls earned business degrees.  In addition, Tammara and her husband of 27 years have been guardians of a young boy with autism, Timothy, now 12 years old.  Life has been challenging for them for the past 9 years, but Tammara and Brandon view each day as a blessing.
Tammara is humble in her accomplishments, but she admits that she has had a lot of encouragement in her pursuits. Her husband Brandon is her rock and biggest supporter.  She says that he shakes his head a lot when she gets into one of her “moods, “ but is always there for her as a buttress

She is also influenced by the inspiration of strong women.  Friends like Angie Wilson, Lucinda Day, Jennifer Warden, and Amber Brown are her champions.  Tammara says that from each of these women, she has learned her mantra. “Live day to day like it is your last. Nothing is promised!”
Being a lifetime member of the Catholic Church, Tammara devotes her Wednesday nights teaching a youth group comprised of 7th and 8th graders, many of whom she has grow from her day care experience.
Tammara Van Ness is a woman who charts her own course.  She defies anyone who challenges that direction.  Does she ever get tired?  She admits that, yes, sometimes she just has to sit down and realize she “can’t walk on water!” Who knows?