Weiser Home of the Total Eclipse of the Sun 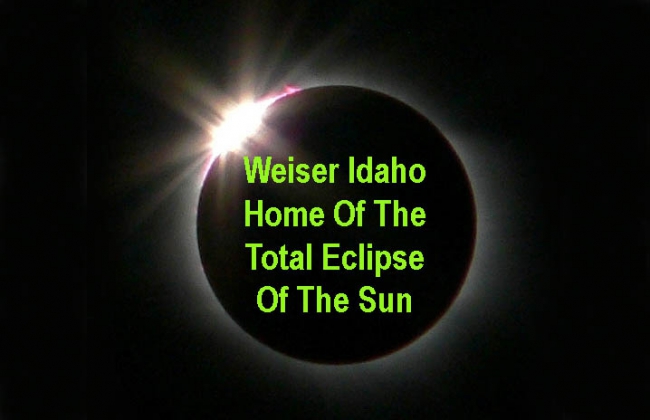 Only totality reveals the true celestial spectacle: the diamond ring, the Sun’s glorious corona, strange colors in our sky, and seeing stars in the daytime.

This being said this year’s eclipse will cover 10 states here in the United States.    It is documented that to have the best view for this event you want to be on the centerline of the eclipse. Center line takes roughly nine minutes to cross a wide swath of Idaho, entering the western part of the state just before 11:25 a.m. MDT and leaving just before 11:37 a.m. MDT..  Since the moon is round and not square, The shadow is round, so the longest eclipse occurs at its center line because that’s where you’ll experience the Moon’s shadow’s full width.

When the sun is at about 85 percent coverage, some will see Venus 34° west-northwest of the Sun.

When viewing this event you must wear eye protection, however, during totality you do not need to have protection.  But only then!  Before and After you must have eye protection.   Nature will show the changes, look and listen, shadows will look different and a breeze may dissipate and birds stop chirping.  These are just a few facts about what is coming our way this summer.  The school district was contacted by the NSO,  National Solar Observatory so began the realization and planning of an event.

An executive committee was formed of City, County, School District, Weiser Chamber of Commerce and Citizens to prepare.  There are delegations from all over the state coming as well as the world.

There are plans for the science and academic aspect as well as the commercial and community preparedness planning.  The Chamber of Commerce is working to plan and coordinate events to the benefit of our community and county wide support.  Contact Patrick Nauman or Lisa Horzen(Leverenz) or www.weisereclipse2017.com  for information or input. There is a tentative schedule of events planned to promote local business and groups.  The idea is to help our great community be prepared and ready for the thousands of expected people coming through for this eclipse.