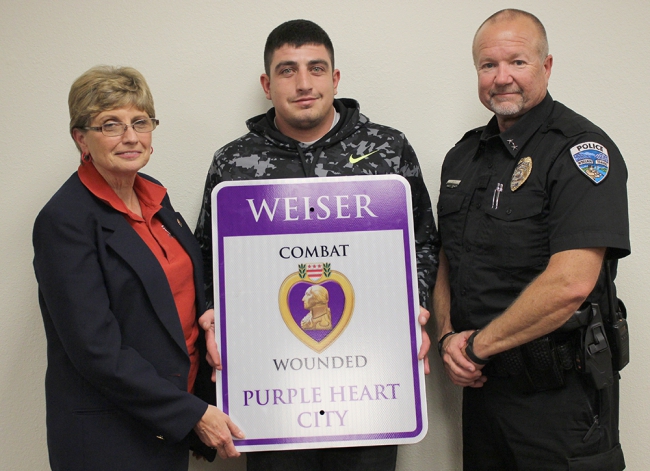 When a person who has been wounded while serving his time with the U.S Armed during time of conflict, he is awarded The Purple Heart, the most respected of all medals to credit his valor, his dedication and his courage.  The medal is engraved with the words, “For Military Merit.”  Those three words barely express the intensity of the sacrifice that a soldier makes to defend his country, his family and the brotherhood of patriotism.
Weiser City police officer, Adam Clinton is humble about his honor.  He, as most proud Veterans will tell you, was simply “doing his job.
Clinton was born and raised in Nyssa Oregon.  He graduated from NHS in 2007. Looking toward a future, but not sure just where he wanted life to lead him, he was recruited into the Army National Guard in 2006, being barely 17 years old.  After graduation, he left for Basic training in July of 2007, returning home in November of that year. He remained with the Army Guard, worked and enjoyed life until he was called up for deployment to Iraq on September 11, 2010.
Clintons M.O.S (Military Occupational Specialty) as a Tank Crewman put into the position of being a 19 Kilo Convoy Escort. His responsibility, along with two other members of his Squad, was to escort semi-trucks and various other supply vehicles to 10 different bases as a support.  It was on a return trip to Cob-Speichs in 2011, a mere 3 months after his deployment when they were hit by an RKG explosive.  Clinton was severely injured by molten copper shrapnel on the majority of his right side, left arm and leg.  His comrades suffered similar injuries; one to his back; the other to his back and “backside.”  Clinton was evacuated to a Bajaj hospital where he was treated, as he says, “For a couple of days, “then entered an approximate 2 month rehabilitation program.
It was while he was still hospitalized the Clinton was honored and presented with The Purple Heart in a formal ceremony performed at his bedside. An honor well deserved!
After being released from his therapeutic obligations, he went back to his duties before being discharged back to the U.S. He served 14 months in Iraq, from September 2011 to November 2012.
Returning to his home soil, Adam found a new world.  He met and married his lovely wife in 2012; moved to Fruitland, worked at the Nyssa Co-Op and Heinz Corporation, before joining the Weiser Police Department as a Patrol Officer in training in September of 2015.
The Purple Heart is said to not be awarded, but earned.  Officer Adam Clinton has the distinction of both!