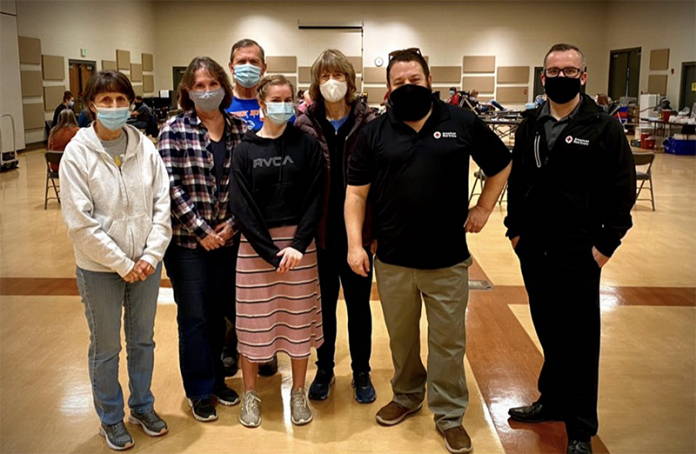 Weiser, in partnership with the American Red Cross, held its quarterly blood drive in the Vendome on March 10. Despite the pandemic, or maybe because of it, 91 people showed up to donate, becoming the largest March turnout by far in many years.

After the unfortunate log jam at the December drive, the Red Cross came better prepared to handle our large number of donors. Increased staff and equipment made the process run smoothly, waylaying long wait times and frazzled nerves. The flow of people was steady all day but there was never a backup.

Since May of 2014, I have unofficially kept track of the number of donors that came to each drive. It is interesting to see the spike for the last two drives. It is also interesting to note that the pandemic throughout 2020 has had no effect on the numbers.

Each quarter, several first-timers donate blood and it is always a pleasure to see them return time and again. This drive we had a first-timer couple, long time Weiser residents Kevin and Tanja Colby. They have been wanting to donate and after seeing the advertisement, they decided there was no better time than the present. Both agreed giving blood was important and very easy to do. In fact, Tanja boasted that it took her only 4 minutes and 53 seconds to fill the vial!

The blood drive could not happen without the help of the volunteers. Blood drive coordinator, Alex Chavarria, pulled it all together by lining up and calling donors. Dorothy Evans worked the registration table during the drive and enters future appointments into the database. Janet Forward helped at the registration table while Laurel and Ron Handel took everyone’s temperature.

Special thanks go to Lynnette Buller and the staff of the Metropole for donating sandwiches and cookies for the donors as well as a delicious meal for the volunteers and workers. We are also grateful to MTE Communications for their contribution that pays for supplies and WIFI.

Weiser’s next quarterly blood drive will be held in the Vendome on Wednesday, May 5, from 8:00 a.m. to 2:00 p.m. Let’s keep this success rolling. Please call Alex Chavarria at 208-602-7138 or Dorothy Evans at 208-549-5589 to schedule an appointment or go on the American Red Cross website to reserve your time slot. Your blood could save a life. There’s no better way to spend an hour of your time.