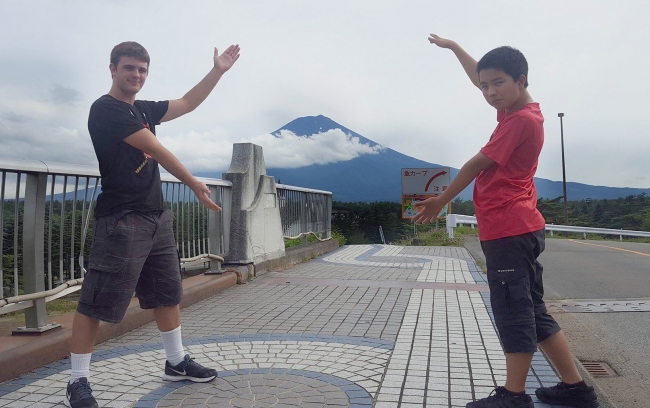 Japan was loads of fun. I went to Japan through 4-h international exchange who teamed up with the Japanese Labo program, which helps Japanese kids learn English, holds English festivals, and also does foreign exchange. My first 4 weeks of Japan was spent inside of Tokyo with my host family the Nakashima family. I went to a language class Monday through Friday. It was tons of fun. I made new friends and had fun playing games and touring Japan. Everyday I had an hour train ride to school where I had three different

trains I had to board. I had one hour lunch breaks to go wherever I wanted to eat and to my findings, most of Japan are a cash society and wont

accept credit cards The last 4 weeks in Japan was spent outside of Tokyo in the Awagi area with my second host family, the Nakai family. This was my most fun time in Japan because I had more freedom to do whatever and I lived closer to the ocean which meant I went swimming a lot. I also had the opportunity to go to three different judo dojos and practiced with very competitive Judokas. I also went to school with them on the last day and went to a concert band which was really cool. The Japanese students only get to choose one activity to participate in. For

example they can join band, choir, or any sport except American football which they don’t have. So all the band students were really skilled in there instruments.  I went shopping a lot with my host family because the host brothers love going out. On my last day they took

me to the bullet train station and we waited around 30 minutes for the train. My train ride was my most rememberable because my host mom cried and I was ready to come home. I was imagining what it was going be like when I came home and who would be waiting at the airport for me. When I finally came home after 2 months, my family, and the Lee family all went to golden coral and ate all we could eat. My most favorite part of Japan was train rides. Thank you to the 4-h state exchange and the Washington County 4-h leaders who awarded me a scholarships, also to the Brook family who gave me a job for the small

amount of time I was home this summer before I left.