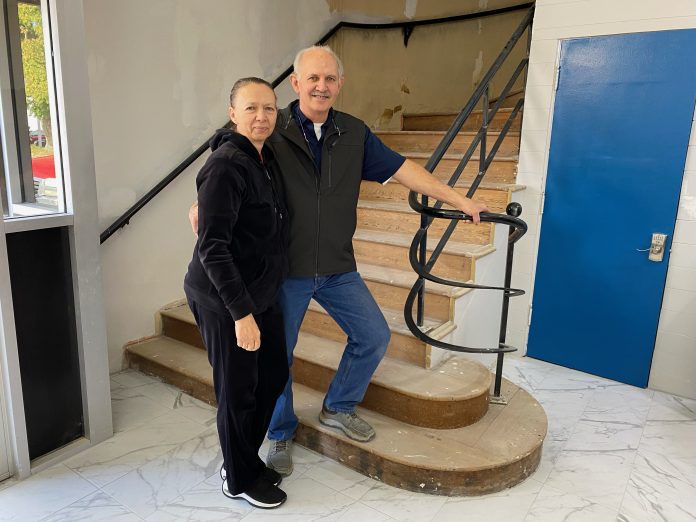 Many people know the building in Ontario, Oregon on SW 1st Avenue.  This building housed the Centre Twin Theatre that originally opened in 1948 with a 750 seat, 2 screen theater.  Since then, the building has been bought and sold a couple times with no real notable ideas for it, until now.

George and Elna Pienaar, natives of South Africa, have lived in Oregon since 2008.  While, according to Elna, George might say they moved to the United States for business opportunities, she believes that “God brought us here, I just knew it was where we were supposed to be.”  Elna expressed that George has been an entrepreneur his whole life, this theater is just another adventure.  They both love a challenge, and this building certainly provides them that.

They purchased the building with the thought that they could turn it into an event center since it cannot be a movie theater ever again.  Elna envisions using it for weddings, concerts, and business conferences.  She says they are very excited to have a place for community events.  This weekend, November 18-19, they will be hosting the Frosty Fest in the foyer of the Centre Twin Theatre.

George is completing most of the renovations himself; Elna admits it will take some time and is not even close to being complete.  As far as what they are keeping, the screens will be kept as a memento to what the building was in its former glory.  They also plan to keep the ceilings that are a waterfall like design, with a little touching up going into them.  George and Elna also thought it was important to keep the projector rooms and do minor updates in them to keep their old-time feel.

Beyond what they plan to keep in the building the Pienaars have added a stage to the venue and have been able to level the floors.  They also plan to add a complete commercial kitchen to accommodate the events they hope to have there.

If you have a chance this weekend, go visit the Centre Twin Theatre and check out Frosty Fest.