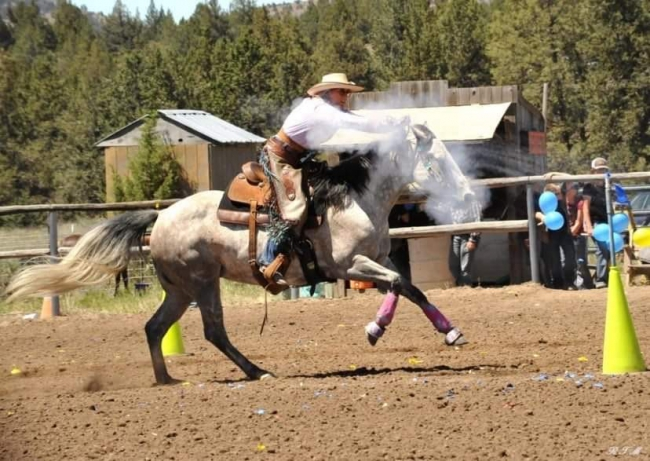 Insurance agent by day, cowgirl mounted shooter by night, Karen Kelley started Mounted Shooting back in 2014 by going to a couple of shoots per year.  In 2018, she started going once a month during the summer months.  Born and raised in Weiser, she grew up on the Weiser Flat where she participated in 4-H, raising and training lambs, riding horses, and working on the family ranch.  Her 4th great-grandfather was one of the original settlers to Weiser and some the family still lives on the property that was originally homesteaded.

Karen currently lives in Fruitland where she works as an insurance agent but on her days off, she travels the West to attend shoots in Utah, Nevada, Washington, Oregon, Montana, California, and Idaho.  She is hoping to go to Amarillo, Texas in the next couple of years where the CMSA Worlds are held.

She describes what Cowboy Mounted Shooting actually is:  “In Cowboy Mounted Shooting, you have two 45 single action pistols with 5 rounds in each gun.  Our competitions will have anywhere from 4 to 6 stages.  A stage is a pattern and there are over 70 patterns to pick from, so our horses don’t get used to running the same pattern and they have to listen to us.  Each pattern has 10 balloons set up.  We take out our first pistol and shoot the first set of balloons, holster that gun and draw our loaded gun to shoot the other 5 balloons.  The loads consist of a primer, gun powder, and a wad, and typically will go out 10 to 15 feet.  The hot embers are what pop the balloon.”

This is a timed event that pushes contestants to do their best.  Karen stated that there are penalties for missing a balloon, knocking over barrels, dropping your gun, or running the pattern incorrectly.  “Then we have shotgun classes and rifle classes.  I started shooting shotgun in 2019 and it’s a lot of fun too.”  Horses have always been a huge part of her life and the experiences do come with risks.  In 2014, her mare, Annie, bucked her off.  She broke her arm in 7 places and struggled with mental health issues to overcome that accident.  Annie has calmed down with age and she is still riding.  Another horse, Jane, is getting ready to compete next year.  She has struggled with the sound of gun fire, so she has been seeing a trainer in Prineville, Oregon (Kitty Lauman).  The trainer has been able to help her get over her fear.

“I am a goal setter so each year I set a goal for myself with my shooting. My goal this year was to move up from a Senior Ladies 2 to a Senior Ladies 3, which I did in June at the Oregon State Shoot in Prineville, OR. That same weekend I had my first win as a Senior Lady 3 and I also won the Limited Ladies Shotgun class. This was most definitely the highlight winning weekend for me in 2020.  I just got back from a shoot in Ogden, Utah and I also won the Limited Ladies Shotgun class. The shotgun class isn’t age specific, so I am running against the “Young Guns”, these young ladies have no fear and are on fire. I can NO way outrun them, so I have to outshoot them to win, as in no missed balloons.  In February I traveled to Vegas for the Nevada State Shoot and won my class there as well.  CMSA (Cowboy Mounted Shooting Association) is broke into levels 1-6 and 50 years of age or older they group you as a senior. You start off as a 1 and move up with qualified wins. To qualify as a win there has to be a certain amount of shooters in your class. Level 6 is as high as you can go,” Karen explained.

A tremendous amount of work goes into this sport, she also mentioned.  Keeping the mares “legged up and on their game” is a big part of it.  She rides 5 days a week between April and October.  During the winter, she tries to ride at least a couple times a month at an indoor arena.  She likes to allow “the girls” time to just be a horse without putting in a lot of work and practice.  “I am very fortunate to have my own arena so I can ride at home during the spring/summer months.”

In August, Karen said that she met a lady in Montana that competes in Mounted Archery.  Being up for a new challenge, she bought a bow and some arrows to start practicing!  “Who knows where that will lead me.  I love change, challenges, and keeping things mixed up!”

JEBS Corner Under New Own...