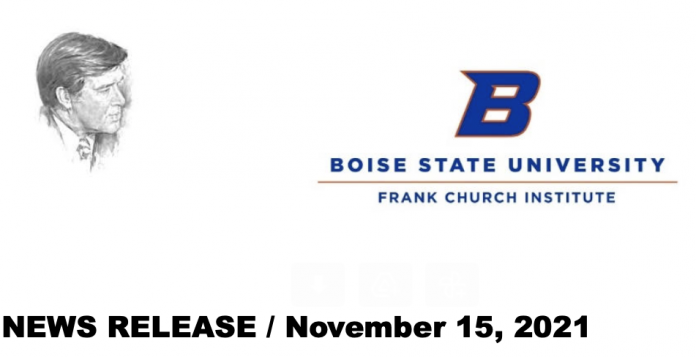 A large bi-partisan majority of Americans in a five-state swath of the Mountain West are on edge about the health of democracy in the U.S. (85%) and yet two-thirds of them believe politicians should find common ground rather than just stand their ground.    Those are the headline findings from groundbreaking new research released today by the Frank Church Institute at Boise State University.

Other jarring themes from current events that emerged from the polling data include:

Working with Boise State University’s Idaho Policy Institute, the Frank Church Institute commissioned a leading Washington, D.C.-based research firm, Morning Consult, to gather public opinions of approximately 1,900 adults in Idaho, Montana, Nevada, Utah and Wyoming in the fall of 2021.  Findings were released today, immediately ahead of the Frank Church Institute’s virtual conference scheduled November 17, 2021 – Democracy on the Brink:  The View from the Mountain West.  The poll has a margin of error of two percentage points.   The full survey is available here..

“Signs of optimism or hope are hard to detect in this extensive new research from the Rocky Mountain states.  Fear, alienation and mistrust characterize the minds of these Americans,” said Peter Fenn, a Frank Church Institute board member who for decades has served as a Washington, D.C.-based consultant/political analyst and a longtime co-host with Pat Buchanan of a political talk show on MSNBC.  “The worry barometer is elevated so high that one of the world’s most successful democracies is vulnerable to political hyper-partisanship, disinformation and dysfunction. The good news is that people expect elected officials to work together to repair the damage.”

Rod Gramer, a member of the Frank Church Institute board and a longtime newspaper reporter and editor and network TV affiliate news director, said that this new research will provide a multi-year opportunity for the institute to understand the alienation expressed in the polling as fully as possible and do its part to restore civil discourse and problem-solving in a region of the country known for  relatively conservative voting and beliefs.

“This research underscores how important the work is for the Frank Church Institute to champion democracy and to establish creative ways to help Americans speak constructively, sends the message to elected officials that people want them to work together to solve problems, and seek real understanding of others’ political views,” Gramer said.  “That is important work in a population where one-fifth of adults believe violence is sometimes justified in driving political outcomes.”

Among the key findings:

The Frank Church Institute was established in 1982 to honor the achievements and to carry forward the principles of Senator Frank Church of Idaho.  Senator Church chaired the Senate Foreign Relations and Intelligence Committees in the 1970s and was credited with uncovering abuses by U.S. intelligence agencies at home and abroad.

Wednesday’s Frank Church Institute Conference, “Democracy on the Brink: the View from the Mountain West”, is free to the public and accessible at: Full conference information is linked here.  It will begin the work of examining the trove of data from the Rocky Mountain States about the perception Americans have of the health of their democracy.

Keynote speaker Celinda Lake, a respected pollster and leading strategist for national political groups and candidates, including President Biden, is scheduled to present her remarks at 11 a.m. (MT) on Wednesday, Nov. 17th.

In its methodology, Morning Consult conducted interviews online and the data were weighted to approximate a target sample of adults in Idaho, Montana, Nevada, Utah and Wyoming based on gender by age, educational attainment, race and ethnicity and 2020 presidential vote choice (including not voting.)

Morning Consult (www.morningconsult.com) owns a proprietary platform with access to more than 100 million people worldwide, enabling over 20,000 daily interviews in the 15 largest economies and custom projects in over 100 counties.  The company has established partnerships with institutions such as the U.S. Federal Reserve; Bloomberg; the New York Times; the European Central Bank, Politico and Bank of Japan.