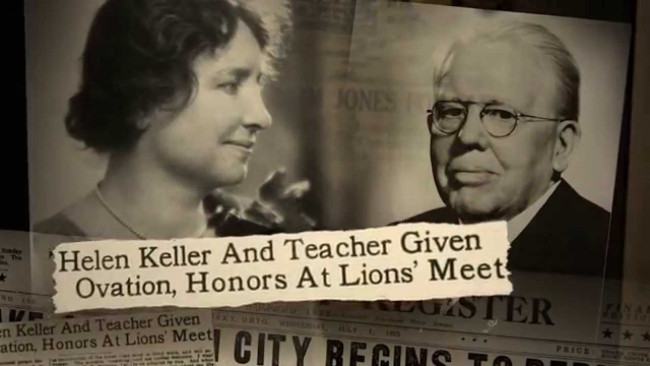 One hundred years ago, Melvin Jones addressed a meeting of Chicago business leaders urging them to use their “drive, intelligence and ambition” to promote the principles of good citizenship by taking an active interest in the welfare of their communities.  His idea grew and on June 7, 1917, delegates from men’s clubs across the nation met to create Lions Clubs International.

Clubs began to form not only in the United States, but around the world as well.

Then on June 30, 1925, Helen Keller spoke at the Lions Clubs International Convention and appealed to the members to become the “Knights of the Blind in the crusade against darkness.”  Ever since, Lions have adopted vision assistance as one of their main goals.  Lions Clubs International is now the world’s largest service organization with over a million members across the globe.

Thirteen years after Lions Clubs International was created, the Weiser Lions Club was formed.  87 years later, we are still going strong.  Weiser Lions are active in vision testing in the schools, purchasing glasses for those with financial needs, helping support the Lions Sight & Hearing Foundation in Boise and the Idaho Blind Camp for Children, and contributing to Leader Dogs for the Blind.  In addition to helping with vision, several thousand dollars are donated to the Weiser community each year for numerous projects helping children, adults and seniors.

To honor Lions Clubs International Centennial Year of the Lion, Mayor Diana Thomas presented members of the Weiser Lions Club with a City of Weiser Proclamation acknowledging the hard work and dedication of the Weiser Lions.  In a short speech, the Mayor voiced her appreciation of their efforts and their commitment to making Weiser a great place to live.  The ceremony was attended by several Weiser Lions as well as the District Governor and his wife.

WHEREAS, Lions Club International was founded in 1917 and is celebrating their 100th anniversary; and,

WHEREAS, the Lions Club is the world’s largest service organization with over 1.4 million members in 215 countries; and,

WHEREAS, Lions clubs in Idaho have distributed over 62,000 pairs of glasses throughout the world and provide vision screening for over 30,000 students; and,

WHEREAS, Helen Keller called the Lions Club, in 1925, “Knights of the Blind in crusade against darkness,” and,

WHEREAS, the City of Weiser appreciates and supports the work of the Lions Club members especially in our local area and what they give back to our community;

THEREFORE, I Diana Thomas, Mayor of the City of Weiser, Idaho, do hereby proclaim

And encourage the citizens of Weiser to show their appreciation by supporting the Lions Club in their many activities.