Paramotoring; Going with the Flow – or – Who is Flying Over Weiser 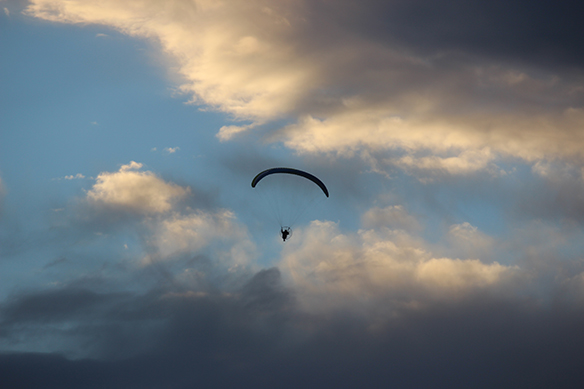 Many people are fascinated by the fantasy of the freedom of flight, but few ever experience the reality. Casey Curtis, owner of Storage On Site in Ontario, Oregon, his 17 year old daughter Mackenzie along with Steve Harper and his wife Charity, proprietors of Enterprise Sales in Ontario, are the only four people in the Treasure Valley who have experienced the simple pleasure of the sport of Paramotoring.
Paramotoring is a relatively new hobby enjoyed by those who seek solo flight without the inhibition that Paragliding incites. Participants are strapped into a harness that consists of a frame

that combines the motor propeller with an integrated seat and cage, providing two attachment points for the rise of

the paraglider wing.  The design provides a powerful and secure flight.  The sole pilot controls thrust via a hand held throttle and steers using a brake toggle, much like that of a parachutist.
According to Casey Curtis, contrary to paragliding, paramotoring is only governed by the restraints of the Federal Aeronautics Regulations, Part 103, which dictates ultra light planes below 250 pounds.  The craft does not require a license to fly, nor does it need to have a radio on board.  However, training schools such as Cloud 9 in Draper, Utah, provide the necessary skill to

ensure that the pilot is skilled in controlling the craft, as well as educating the student in safety issues.
Curtis states that before fun, comes caution.  “We fly low and slow, “he says.  The craft is capable of flying up to 10,000 feet above ground; however, most pilots prefer to remain approximately 500 feet above ground at a speed of about 25 MPH in order to remain in control.  The biggest concern is not necessarily wind velocity, but the convective energy between the earth and the sun.  Another advantage of the craft is the fact that it can depart and land from virtually any location.  Accordingly, the approximately 100CC engine (give or take) holds 5 gallons of fuel, enabling one to soar for 3 hours or 75 miles, whichever comes first.
Recently, the group finding perfect conditions chose to explore the countryside. Lifting off from Fruitland, they embarked to Weiser, where they landed at Hillcrest cemetery in Weiser, loaded up their equipment in the back of a relative’s pick-up and enjoyed a meal in a local restaurant.  The perfect ending to a perfect day!