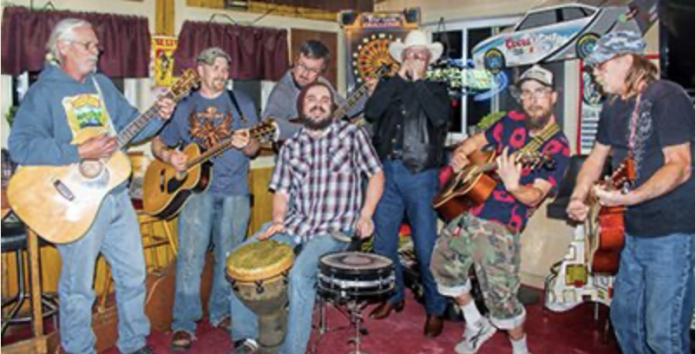 With Weiser being home to The National Old Time Fiddler’s Contest, it seems only fitting to have our very own group of talented, local musicians. Dubbed “The Old Man Jam Band”, these guys have been playing together for many years. The Old Man Jam Band typically consists of Steve Morningstar Sr. (guitar), Steven Morningstar Jr. (guitar and banjo), Zane Beams (guitar), David Drumm (guitar), Cade Skow (percussion), Nick Ziegler (upright bass), and various other players that show up from time to time.
It all began several years ago with “Thursday Jam Night” at the Crescent. Originally orchestrated by Steve Morningstar Sr., who was at the time bartending for the Crescent, the idea was basically to have an open-mic jam night, where musicians of all genres could get together and jam. This became pretty popular at the Crescent, and continued off and on until the bar closed its doors last summer.
Rhonda Nelson, bartender at Clifford’s Tavern, picked up where the Crescent left off and has revived The Old Man Jam Band, this time at Clifford’s. She has been very dedicated to keeping the local music scene alive and well, so she deserves a big thank you! Come down on a Thursday night around 8 pm, and let Rhonda serve you a cold beer. Stick around for a little music and perhaps dancing. Bring an instrument, if you like! You just might have a good time!
One a side note, a few of the members have branched off and formed a side gig, The Morningstar Beams Project, consisting of Steven Morningstar Jr., and Zane Beams, with Zane’s daughter Stella Beams playing fiddle, and Nick Ziegler playing bass when he is in town. They are a primarily an Americana, acoustic piece. They have entertained many private parties, Friday Night Live at Washington Square, The IdahoDown Music Festival at Brundage Mountain, and will be playing the main stage Thursday night 8-10 pm during Fiddle Week, so keep an eye out for that.
Submitted by Erin Miller. Erin and The Old Man Jam Band are Living In The News .Com