Woodhead Fire – Heavy Smoke Cleared Out Of The Area 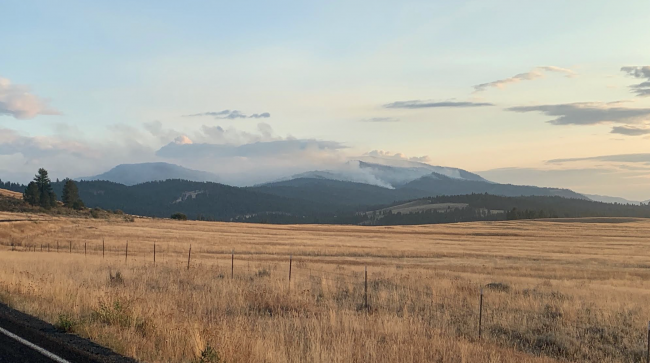 Variable trace amounts of rain were recorded on the Woodhead Fire yesterday.  Relative humidity stayed higher and some cloud cover passed through the area.  Most notably, heavy smoke cleared out of the area, creating clean air for residents and clear visibility for aviation resources.  Helicopters supported firefighters with water buckets, and fire managers were able to reconnaissance.  Existing roads are being utilized as fireline, connected by fireline built either by dozers or hand crews.

Fire activity did pick up late in the day, causing smoke plumes to be visible in the vicinity.  However, this smoke was mainly from heavy dead and down vegetation, such as large trees, which produced thick white smoke but caused only minimal overall fire growth.
Winds will increase again today, and a warming, drying trend will be in place throughout the

week.  High temperatures will remain near-normal, and relative humidity isn’t expected to drop below 30%.  This will be very advantageous for firefighters.  With the change in weather, tactics are changing to a more direct approach, constructing fireline directly on the fire’s edge rather than further away from the fire in an indirect approach.

Containment has been achieved on fireline on the southern portion of the fire.  Evacuations have been lifted for Seid Creek, East Pine/Pine Estates, Advent Gulch, upper Rush Creek, and Cow Creek.  Additionally, Washington County roads within the fire area are open, including Mill Creek and West Pine, to residents and through traffic.  The burned area remains closed in addition to the existing closures described below.

EVACUATIONS –  Evacuations are still in place for Ditch Creek, Wildhorse, and Crooked River. Residents may be escorted in to care for animals; contact the Adams County Sheriff at 208.253.4227.  The Red Cross is available at 800.853.2570 to assist evacuees.

CLOSURES –  The Council-Cuprum Road is open to residents only between Council and Mile Marker 12; it is closed beyond that.  The Idaho Department of Lands asks that everyone stay out of the endowment lands west of Council for their safety until further notice.  And the Payette National Forest’s full closure description and map are available at https://inciweb.nwcg.gov/incident/closures/7163/.