4th of July in Weiser 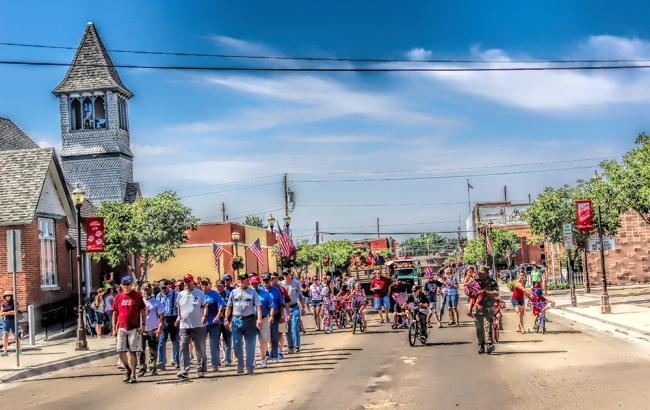 By Larissa Cheney and Article Below From Wil Overgaard

Lineup for this year’s 4th of July Veteran’s March will start at 11:30 on Monday, and the parade will step off at noon, according to Jim Grunky. The parade of veterans and patriotic citizens in red, white, and blue will end at Veterans’ Park, where Jim Reed will give a patriotic speech and a flag ceremony will be performed. There will be no picnic this year, but the fireworks will go off at 10:30 pm or nightfall at the field next to the Hillcrest Cemetery as usual.

Everyone is invited to attend the Veteran’s March, but the veterans would be even more pleased to have high attendance at the ceremony following it. The Weiser High School Choir may perform the National Anthem, and the flag ceremony will be performed with a flag donated by Rob Haun, son of Herb and Kelly Haun. Rob is currently serving in Turkey, and he and three other Washington

County locals in the military have flown it on Memorial Day in Turkey as well as over Syria and Iraq before mailing it here. The flag has been donated to the City of Weiser and it is the Hauns’ hope that the city will be able to respectfully fly it. The ceremony will include the story of the flag’s journey and the meaning of such an honor.

The City has prepared for the Independence Day parade by getting the Veterans’ Park into “tip-top shape,” according to David Tate. They will also assist in blocking off the streets. In past years, there has been a picnic with free hamburgers after the event, but it became “just too much to keep up with”, and when someone was needed to take it over, there were no new volunteers. The LDS church did help last year, but a group of patriotic volunteers is still needed to

take up the mantle. Also needing assistance is the fireworks fund, and firefighters will be passing around the boot before the fireworks show Monday evening.

The founding fathers left us a legacy and a blueprint for self-government that remains unrivaled in the world. There is much for us as Americans to be proud of and good reason to celebrate the nation’s 240th birthday.

The parking lot at Weiser High School has become a site that some local citizens use to celebrate the Fourth of July, setting off fireworks

while waiting for the Fire Department’s display in the vacant lot next to the cemetery.

The Weiser Board of Trustees and the district’s insurance carrier are not opposed to the use of the facility for this purpose but we do ask those people who choose to use the parking lot for their celebrations to follow a few simple guidelines:
Please stay 200’ away from the buildings
Please pick up and dispose of your refuse at the end of the evening
Please use only legal fireworks – meaning non-aerial fireworks.  Non-aerial is defined in Idaho Code (39-2602) as “any fireworks designed to remain on or near the ground and not to travel outside a fifteen (15) foot diameter circle or emit sparks or other burning material which lands outside a twenty (20) foot diameter circle or above a height of twenty (20) feet”.
Violators can be charged with a misdemeanor but a more important consideration is simply to protect the high school facility from any unintended fire hazard.  We share in the desire of the public to celebrate the Fourth of July in customary ways, but we would also like to protect our schools from any dangerous fireworks displays.   We thank you for your cooperation in participating in safe and enjoyable ways to celebrate the nation’s birthday, its democratic traditions, and its tenets of personal freedom and responsibility.