Because Each Piece Of Clothing Counts At A Traumatic Time 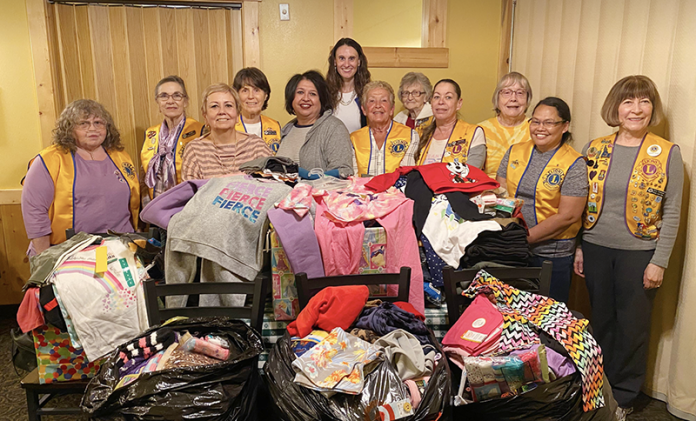 By Dorothy Evans
Throughout the month of March, the Weiser Lions, now in its 92nd year as a service club in Weiser, held a community-wide clothing drive to benefit sexually abused children being helped by ROSE Advocates. To get the word out, articles were written, flyers were posted in windows and collection boxes were placed in various churches and businesses around town.

The people in Weiser rose to the occasion. Right from the start, new pajamas, leggings, underwear and sweatpants started pouring in, overflowing the boxes in many locations. Kids’ clothing of every size, color and design were donated. By the end of March, enough clothes were collected to fill several large garbage bags.

At their meeting on April 5, the Weiser Lions emptied all those bags on a table and presented the huge pile of clothes to the appreciative representatives of Rose Advocates, Dolores Larsen and Veronica Vasquez.

The Weiser Lions wish to thank all the generous people in Weiser who made the clothing drive a big success, benefitting children needing a helping hand during a traumatic time. Appreciation is also extended to the many churches and businesses who allowed a collection box on their premises during the entire month of March. Working together, so much can be accomplished.

The Weiser Lions also collect used eye glasses and the tabs from aluminum cans year-round. The used glasses are shipped to the less fortunate around the globe and the pop tops are donated to the Ronald McDonald House in Boise. A special thanks to the Senior Center and Columbia Bank who allow us to place drop boxes at their location for these items.