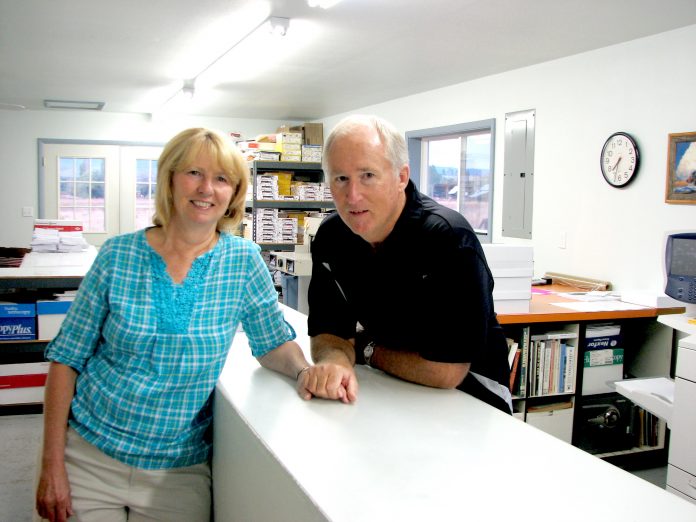 After 49 years in the printing business, Don and Betty Dopf are closing the doors on Cambridge Litho, Inc. on Friday, September 30th.

Since August of 1973, the small family-owned business has processed 25,438 printing orders and served customers as far away as New York City. The customer base has included businesses and individuals mostly within one hundred miles of Cambridge that include medical facilities and car dealerships.

The business was launched as a partnership between Don and Alan Dopf in August of 1973 after the two young men had completed four years of military service, followed by schooling in graphic arts at Idaho State University. Cheap, used, basic equipment was purchased and the company was soon producing business forms, brochures, flyers, cards, envelopes, etc. Initially, the typesetting was done on the newspaper’s old Linotype machine that facilitated letterpress and offset printing methods.

Within the first year, Alan sold out his share of the business to Don and put his skill and efforts into The News Reporter, converting the paper to photo-offset and allowing father, Stu Dopf, to retire for a short while.

Don supplemented his income from the fledgling business during the first year by driving a water truck in the mountains during the night for his father-in-law’s log-road building company, Iron Mountain Lumber Company while Betty went to work as an office clerk at Cambridge Elevator Company. Betty would later work for the newspaper as a typesetter and paste-up hand. Rent on the building was paid for by Don writing sports news and other articles for the newspaper, and photo processing before the digital age. The sports writing continued for nearly thirty years and became a passion for Don following the local teams.

The company received a huge “shot in the arm”, from Don McMahan, editor and publisher of the Star-News in McCall in early 1974 when his commercial printing plant in Cascade was closed. Don transferred all of his commercial accounts to Cambridge Litho, which included McCall Memorial Hospital, five medical clinics, hotels and motels, and Intermountain State Bank. Don made weekly trips to McCall to service these accounts for the next 39 years.

With the advent of personal computers and digital printers in most homes and businesses, the company was forced to diversify and found good opportunity in helping quite a few individuals the ability to self-publish their own books. Additionally, Cambridge Litho produced and sold time record books by mail order to railroad conductors and engineers as part of the business from 1993 through 2021.

Originally, the business was housed in the small building attached to the back of their parents’ Upper Country News Reporter office on Superior Street in Cambridge. After 25 years of business in the downtown area, a new facility was constructed about one mile east of town behind Don and Betty’s home, where the company has served to this day.

Cambridge Litho customers who have standing digital files with the company can still access those files for future printing with Deidre B Marketing, Photography, and Printing by calling Deidre at 208-866-0634 in Cambridge.

Don and Betty express their sincere gratitude and best wishes to their loyal customers over the past 49 years.