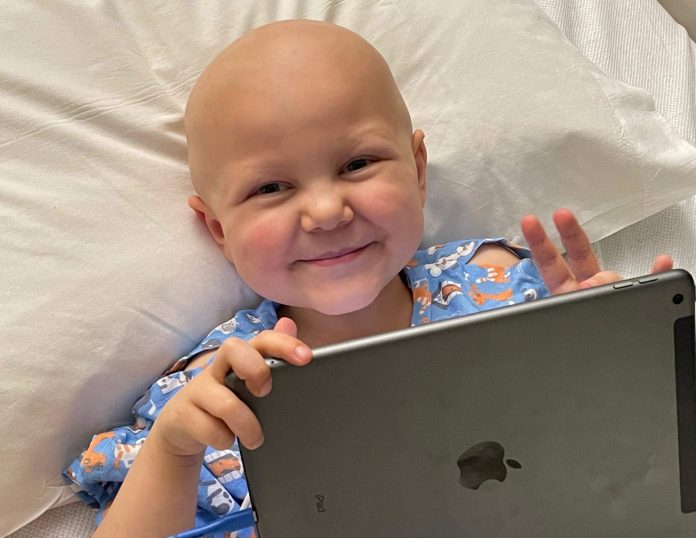 Trisha Harris, the mother of Danni and Kaylee Harris, passed away in August of 2020 from a rare complication from routine knee surgery. Months later, youngest daughter, Danni Harris, was diagnosed with brain cancer May of 2021. Danni turned 6 years old just this last July and has not given up on her journey to beat this cancer battle. Her sister Kaylee has been one of her biggest supporters to continue to fight in this battle. Kaylee is a freshman at WHS and is on the freshman/sophomore volleyball team.

September 20th was Danni’s latest treatment for chemo. With finishing chemotherapy successfully, Danni also completed a scan. The scan concluded the tumor in her brain is not visible to the naked eye, but is likely to reproduce without radiation.  Due to these results, Danni will be continuing with intense radiation for treatment in the next 6 weeks for an extended period of time in either Seattle or Los Angeles. With this out of state trip, expenses will be high and the Harris family will be in need of some extra help to continue this fight for Danni.

On Thursday, September 30th, 2021, the WHS Volleyball team will be hosting a fundraising event for a local child cancer survivor. September is known for being child cancer awareness month. Every year the WHS volleyball team has a cancer patient they try to support as much as possible. This year, the WHS Varsity volleyball team chose to support Danni. All funds and donations will go towards Danni Harris and her upcoming expenses.  The event will be at Weiser High School approximately at 6:30pm. To help support this fundraiser, there will be a bucket run within the stands. The Varsity volleyball team will run around with buckets and collect as much money as possible for Danni in the time limit of 1 minute. To keep Danni safe from the circumstances of this pandemic, she will be given a special seat in the stands on a couch with her sister Kaylee and her father John Harris. Not only will she be given special seating for the game, but Danni will also be the honorary captain for the Varsity game.

If at all possible Danni is not feeling well and is unable to join, the event will still go through and support the family. The volleyball team wants as many people as possible to come and support Danni at this event. Everyone come and support this outstanding fighter, Danni Harris, Thursday September 30th at 6:30pm!