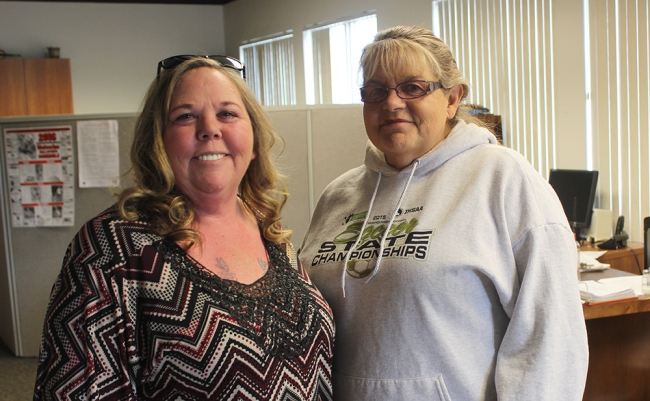 The Weiser Chamber of Commerce Award winners have been decided, and if the factors determining the Business Person of the Year are ambition, drive, community involvement and unwavering energy, then the recipient, Debra Aburto, definitely qualifies for the honor.  In fact, Aburto doesn’t have the distinction of owning one business, she is the owner and operator of three businesses.
Debra Aburto is the owner of the Copper Lounge, a successful watering hole for adults in Weiser, but she also has recently opened El Tamalito Mexican Restaurant.  El Tamalito also houses the Kid’s Kingdom Arcade that formerly occupied Weiser’s historic Pythian Castle building.
Aburto originally hails from Emmett, but began investing in real estate in the Weiser area in 2002.  In 2006, she had the opportunity to acquire ownership of the Copper Lounge.  Although she had no previous experience in the bar business, she has turned the establishment into a thriving business that not only is popular with patrons, but she is always willing to donate goods, services or financial assistance to numerous causes in the community including the Weiser Chamber of Commerce, the Mud Drags, Angel Wing Network and the local rodeo, the Weiser Valley Round-Up, to name a few.

Aburto is the proud mother of two children, Jose and Cristina.  Jose, and his wife Katrina, reside in Weiser with their three daughters, and Cristina is a student at Boise State University, studying forensic psychology, while simultaneously raising a daughter and a son.  Debra smiles a little brighter and beams with pride when she talks about her children.  Especially, her five grandchildren.  In fact, when asked why she works so hard on so many endeavors, she never hesitates and says, “I care about the youth of our community, and I will do anything to give my grandchildren an opportunity at a better life.”  Aburto says her grandchildren were the impetus for wanting to open the arcade.  She sees kids in the community that are bored and hanging out with their friends in unsupervised areas of town, which makes them more susceptible to drugs and unproductive activities.  She hopes to curb some of those behaviors by providing a safe environment for kids to “hang out and have fun”.  She believes since the arcade is now in the El Tamalito building, it can be utilized more as a family event.
Adding to her goal of helping out the youth of our area, Aburto works very hard to hire as many high school students as possible.  Experience is generally not a requirement.  Employment at one of Aburto’s businesses will provide that.  Her requirement is a willingness to work hard and do a good job.
“I’ve always wanted a Mexican restaurant.”  That has long been her dream.  She has done catering for weddings and various events for years, but a restaurant was her ultimate goal.
Aburto is not what you would call a typical business owner.  She is not only the owner and manager of the businesses, but she is also one of the main chefs at El Tamalito, occasional bartender of the Copper Lounge and financial decision maker for all of the business ventures.
When asked what being named the Business Person of the Year meant to her, Aburto in her usual humble manner stated, “I’m excited that I would even be considered.  I usually like to go unnoticed, so it surprises me that anyone would even nominate me.”  She goes on to say, “But, it is very nice to be acknowledged.”
If you would like to stop by and give Debra Aburto the congratulations that she deserves, you might be searching for a bit.  You might find her at the Copper Lounge at 45 E. Idaho, and enjoy a celebratory drink with her, but she could also be at El Tamalito at 116 W. Idaho Street.  If you stop in at the restaurant, you could share in a delicious meal that Debra makes with love and her passion for superior Mexican cuisine.  Whatever the situation or location, track her down and tell her Congratulations on this well-deserved honor.