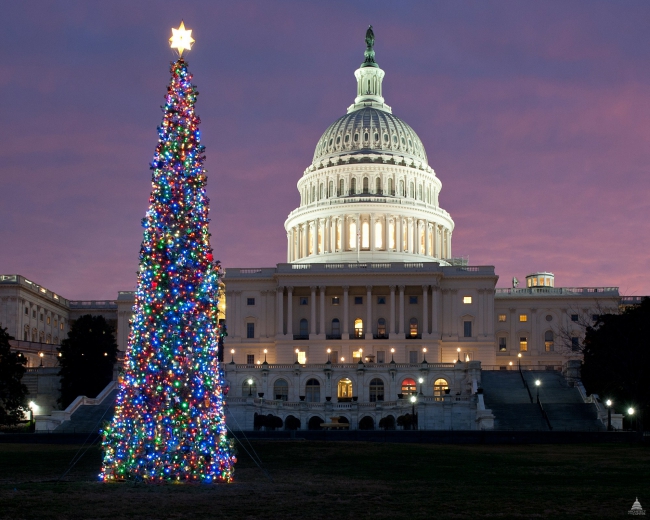 Recently, I had the honor of speaking with Julie Chandler, one of Weiser’s co-chairman for the Capitol Christmas Tree Event in Washington DC. This year’s theme is “Idaho Mountain gem.”  According to Julie, this annual tradition began in the early 1960’s. Up to 70 designated trees are placed and decorated in and around the Capital building and one on the west lawn near the U.S. Capitol Building in Washington DC to celebrate the Christmas holiday season. Idaho was last represented in 2003 with a tree chosen from the Boise National Forest. This year’s tree is coming from a secret location in the Payette

National Forest. Choosing a tree to represent our state is no easy task. The requirements are that the tree must be from 65 to 85 feet tall, filled out and visually appealing. This year’s tree was initially chosen by smokejumpers based out of McCall and then ok’d by the Capitol Tree Committee. Julie, along with Layna Hafer, Weiser Memorial Hospital and Matthew Nourmohanadian, Payette National Forest Representative, make up the local 3 person committee. The tree will officially be cut on November 3rd and will then be prepped and carefully placed on the specially built enclosed trailer for its lengthy journey. With a tree of this size consuming up to 40 gallons of water a day, a special watering system had to be implemented on the trailer to allow for daily watering to keep the tree fresh. Because the

tree is enclosed, a special viewing window was also added for easy viewing of the tree. The tree is scheduled to arrive in Weiser in the evening of November 7th where it will be closely guarded by local Weiser security folks. The next day, November 8th, a two hour gala has been planned to commemorate this historic event . Several local guest speaker are

scheduled to make appearances as well as the Weiser High School Band and Choirs along with other local talents who are scheduled to perform. Everyone is encouraged to attend the celebration for holiday fun and festivities. Following the gala, the tree is set to leave Weiser to

continue on its journey, with it being set to arrive in Washington DC on November 22nd. Besides the gala, Senator Mike Crapo is sponsoring a writing contest that has been announced throughout the Idaho schools. The one lucky winner of the contest and their family members will be asked to attend and assist with the tree lighting in Washington DC which is scheduled for early December. Besides the tree, local Idahoans have been asked to provide 8,000 handmade recycled ornaments. With that request, numerous local community groups and school children quickly jumped in to begin making the ornaments and tree skirts. About 500

ornaments and 10 tree skirts have been made since school began. Julie did state that she would be keeping a few ornament fro each set of the submitted ornaments for her and the high school L.E.O. Club to decorate a tree at the annual Festival of Trees in Weiser to represent the Capitol Christmas Tree, a project she is so passionate about. Although a lot of hard work, Julie states “It has been a fun project.” She would like to thank everyone for their hard work and dedication to helping make this happen. If you would like to track this project, you can follow the progress online at: www.capitolchristmastree.com or follow on station partner KTVB.