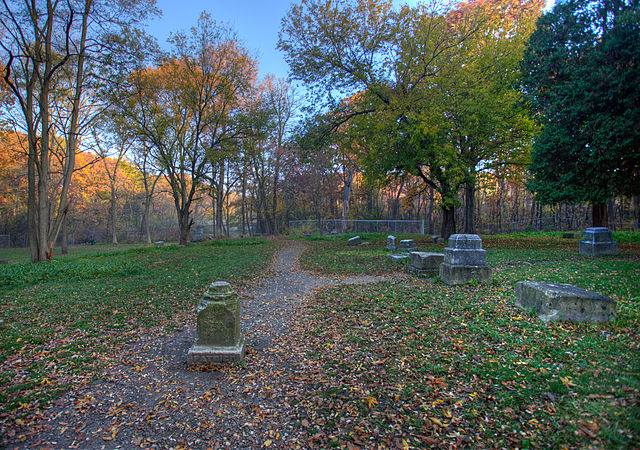 As the lazy days of summer fade into cooler nights and crisp falling leaves, thoughts of walking through a hushed cemetery at night with nothing but a flashlight to guide your way can be a stirring experience for many people. Some a mature ghost hunting groups actually use cemeteries as “training grounds” for their teams. Oddly

enough, a lot of cemeteries aren’t that haunted. It is common knowledge in the paranormal field that human spirits haunt locations where they were happiest, that held the most comforting memories or perhaps where they died tragically. Most commonly if you do pick up on any paranormal activity, it is usually the residual grief of a person instead of their actual spirit linked to the location. Cemeteries gain the reputation for being haunted for reasons that include the desecration  of the dead through grave robberies, unmarked or forgotten burials, natural disasters that disturbed resting places,  or sometimes the deceased were

not properly buried at all. There are many cemeteries that are reportedly haunted. One such cemetery is a small, abandoned cemetery on the outskirts of Chicago, Illinois. Bachelor’s Grove Cemetery has more than 150 documented reports of strange occurances. These reports include apparitions, unexplained voices, ghost lights and other odd activity. One of the most compelling photos in the paranormal field was

captured in 1991. This photo was captured by an infa red camera an amature ghost hunter was using during an investigation. This detailed photo shows what appears to be a semi transparent woman sitting on a headstone wearing what is believed to be a burial shroud. She was not visible to anyone at the time this photo was taken. The woman was aptly named The Madonna of Bachelor’s Grove. This photo has undergone every test and review by top paranormal researchers from all over the world finally drawing the same conclusion that it does appear to be authentic. This photo, along with many others from all over the world still remain scrutinized to this day. We may never truly know if this photo is 100% authentic, but the shroud of mystery will always remain in the paranormal world. ~Debbie Frediani~ Visions Paranormal Society