Frieda Strong – A Life of Irony 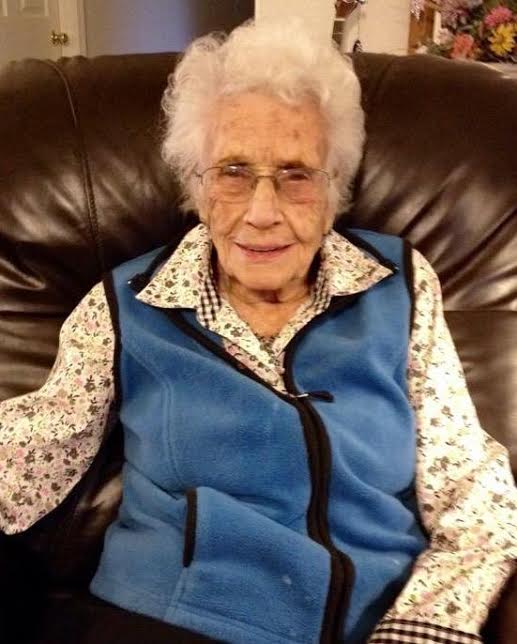 By Marsha Woods
Living a lifetime filled with irony is no mere coincidence. For Weiser’s Frieda Strong, it has been 95 years of acceptance.
Frieda’s story began when her Grandparents, the Brown’s, chose the Mann Creek area in which to homestead on September 27, 1900. Her mother, Maude, was a mere 2 years old…
Frieda was born in Weiser on September 22, 1920 to Maude and Henry Attebery. She attended grade school at Mann Creek before having to board for a year in Weiser in order to go to High School.  During her last 3 years she lived with her Grandparents. Having an innate aptitude in the field of secretarial skills, she won honors in her typing and shorthand classes. Frieda graduated at the top of her class in May of 1938, along with lifetime friends such as Bonnie Walker and Lois Jones.   That date began a paradox that seemingly follows the family today!  Her daughter, Marge Strong Anderson graduated from Weiser High School 1n 1968, 30years to the day; her Grandaughter, Pepsi Eddy Odoms follow suit exactly 20 years after her mother! A fluke of fate?

Frieda’s career as a secretary, wife and mother began with her first job.  She was hired immediately upon graduation by Attorney Frank Ryan (father of know Attorney, the deceased Harold Ryan.) Her life as a wife and mother was set in motion when,  while standing outside her backdoor one day, she spotted a “gorgeous” young man who flustered her so much that she slammed her finger in the screen door!  Naturally, the clamor elicited his attention!  Thus began a lifetime love affair. Frieda and Floyd Strong were pronounced husband and wife a short 3 months after Frieda’s finger healed!
The couple’s early life together was one of adventure and dreams of a better way. Being as it had begun in the depressive days after World War II, work was difficult to obtain. They travelled the country, perusing the unknown. Frieda was relieved when, in 1944, pregnant with their first child, Leroy, (past WPD Chief) they returned to Weiser.    Floyd’s wanderlust continued to control his spirit.  The couple ensued.  Finally landing in California, raising three children more children; Mike, Marge and Sherry, Frieda never stopped working. She was employed with Kaiser Steele when one glorious day when Floyd announced that he was taking her home!  Her dream had come true!
Frieda’s determination, ambition and love of her husband and children spurred her. Arriving back in Weiser, she obtained a position with Attorney Harold Ryan, the son of her very first employer!  Another one of those enigmatic happenings that seemed to rule her life!  One of Frieda’s most cherished memories is the day that she talked to, then President, Ronald

Reagan on the telephone! Harold Ryan left to become an Idaho Federal Judge.  Frieda didn’t let grass grow under her feet for long! Soon after, she went to work for Attorneys Mike Sweet and Brad Masingill; retiring at the age of 62. Never one to sit still for long, she took the job as Weiser Chamber of Commerce Secretary, where she sat behind the desk for another 10 years!
Frieda Strong is a courageous woman with a history of positivity!  She has devoted her life to her children, her grandchildren, her Church and the community that she loves. She enjoys sewing, knitting, camping, reading and her time visiting with her companions at the Weiser Senior Center.
The love of her life, Floyd, passed away approximately 12 years ago; Frieda continued to live alone until her health dictated a move to Indianhead Estates 2 years ago.  She still smiles widely, enjoys good health and a particularly independent life!
A celebration of this amazing woman’s 95 years will be held September 22, 2015 with an Open House at the Weiser Senior Citizen Center. Hosted by her proud children, she will be honored from 11:00 A.M. to 1:00 P.M.  Lunch will be served!  Stop by with a greeting and a Hug!  You will be guaranteed to get one back!