What Is THAT In My fridge!?! 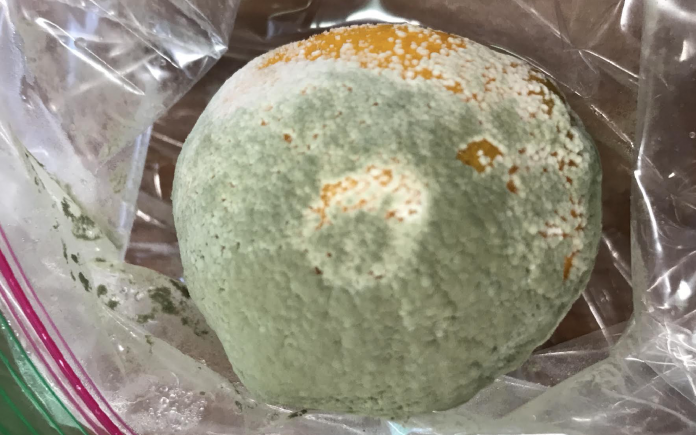 COVID has brought some interesting and sometimes tiresome changes to our way of life, but that doesn’t make the world around us a less interesting place. In the absence of creatures to swat (or not), we will switch column topics to something that can thrive year-round—molds and mushrooms!

Molds and mushrooms are every-day terms for “fungi”. Once classified as “lower” plants, these interesting organisms have a life all their own. Molds are composed of microscopic filaments called hyphae that make up the body of the fungus. Some molds form mushrooms. Mushrooms are visible fleshy structures of molds that produce the “seeds” of the mold which are called spores. In our day-to- day interactions with fungi we are going to be most familiar with mushrooms in the lawn and molds on spoiling foods (e.g. the back of the fridge!).

Fungi tend to gross us out a little, until we get to know them better. Then they become among the most fascinating organisms on earth! Did you know that fungi have helped change history?

In 1928, a British bacteriologist, Alexander Fleming, was attempting to culture a bacterium. To his disgust, he found his culture contaminated with a blue-green fungus. Tossing aside the contaminated plate, he re-cultured the desired bacterium. A few days later he was about to discard the contaminated plate, when he noticed that the blue-green fungus was inhibiting the growth of the bacterium. Colleagues to whom he sent a culture of the fungus later purified the compound that was to become known as “penicillin”. This antibiotic was later produced in mass scale under emergency conditions for World War II and is credited with saving the lives of thousands of Allied troops.

The fungus that produced penicillin is a species of the group Penicillium which has over 350 species. That blue-green fungus on the bottom of your French loaf? Or the side of the piece of cheddar that was buried in the back of the fridge? Those are Penicillium.

They may be a part of history! But should they be a part of your lunch? These fungi should not cause panic. While one should never consume an unidentified fungus, the bread and cheese are salvageable. Simply slice off the affected portion and try to use the remainder as soon as possible. Fruit or jelly showing signs of this fungus should be discarded as these products are spoiling when the fungus appears. Remember, the fungus isn’t so bad, it is just in the wrong place!