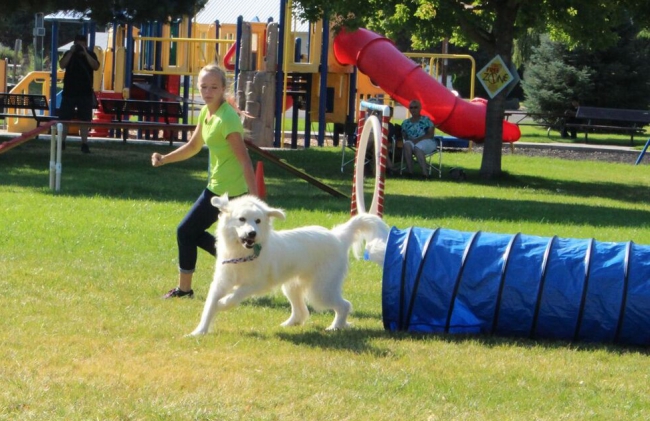 Although the official festivities of the Washington County Fair kicked off August 1, 2016, the 4-H members with dog projects started a bit early.  The dog agility and obedience competition is always held on the Saturday prior to fair, due to time constraints.

The Washington County 4-H dog agility and obedience was held Saturday, July 30, at the Weiser City Park.  The day began with the junior handlers and their dogs competing in the agility obstacle course.  The course is comprised of a series of jumps, tunnels and other obstacles, and although every run is timed, it is faults in the course that can make or break a run.
There were two divisions in the agility competition; one for the beginner handlers and canines, where the handlers

Thirteen junior handlers also competed in an obedience competition, where the teamwork between dog and human is exhibited and put to the test.  Again, there were two divisions:  off leash and on-leash, in the obedience section.
In the on-leash division, Mja Towner and Murphy were again named “top dog” in the obedience section, followed by CJ Davis and her Border Collie, Zip.  Keith Farrens and his Golden Retriever, Missy, won in the on-leash portion, with Nora Chandler winning Reserve Grand Champion.
It was a lovely day for a dog competition, and all of the dogs and handlers did a great job with their “best friends”.  The members will conclude their dog projects when they compete in the showmanship portion on Friday, August 5, 2016 at the Washington County Fair.