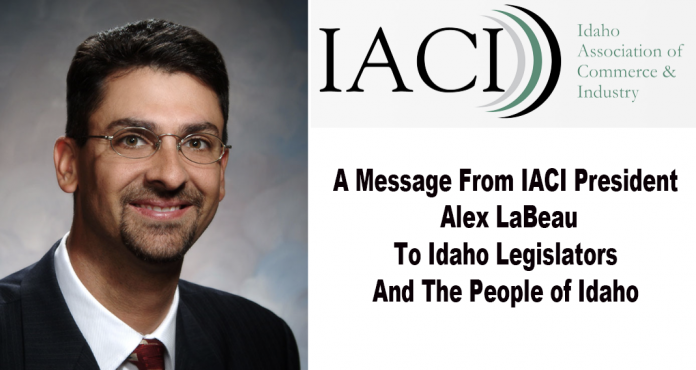 To the Representatives, Senators, and people of Idaho:

Idaho’s independent and entrepreneurial spirit was buoyed when the Gem State became the least regulated state in the nation nearly two years ago. Our state government proudly cut over 1,800 pages of administrative code and showed the nation that Idaho was not only open for business, but that we’ve also created an environment in which business can thrive.

Since then, too many of our elected legislators have lost their way and abandoned the core conservative principles they promised us they held dear. As they now look to pile more government mandates onto the backs of businesses and attempt to control the private sector by adding constraints and regulations to free enterprise, make no mistake that it is all for the purpose of scoring political points and appealing to a tiny philosophical fringe. For that, shame on them. They know better than to put tyrannical practices on the free market. There are no Idaho employers asking the Legislature to impose new regulations on their ability to run their businesses and keep their employees safe. While we applaud Governor Little for joining a multi-state lawsuit against President Biden’s gross overreach to infringe on private businesses’ rights to set the COVID-19 health standards they see fit, we are dismayed that the Idaho Legislature now seeks to convene to tell Idaho employers how to run their businesses. Idahoans overwhelmingly stand for the division of government and business and letting the private sector determine its own practices for the well being of its workforce. As we hear about possible legislation from self-proclaimed “champions of liberty and limited government” in support of guaranteed salaries and stripping the rights of entrepreneurs, we couldn’t stand by quietly as this thinly cloaked socialism gets wrapped up in a facade of freedom. These are not the values of this state or its people.

Idaho businesses have worked tirelessly throughout the pandemic to find solutions to keep their businesses open and their employees safe. The Idaho Legislature should do nothing to threaten those actions, and instead should wait until the United States Supreme Court rules on the dictates coming out of OSHA and the White House regarding new vaccine mandates on employers. There is no sound reason for the Legislature to be in Session until that happens. Putting Gem State employers between a rock and a hard place of two conflicting mandates only further burdens businesses trying to manage their way through this pandemic while keeping Idaho’s economy moving forward. Many of the actions currently being discussed by legislators would have a devastating impact on Idaho employers and will lead to business closures, job losses and a setback for our economy.

The Idaho Association of Commerce & Industry applauds those lawmakers with the backbones to speak out against this unnecessary legislative session that seeks to meddle into the private sector’s ability to conduct their affairs, and we’d hope their legislative leadership can match their intestinal fortitude and resolve. IACI and its member companies will oppose any attempts by the Legislature to impose unnecessary restrictions and new liability on Idaho employers regarding vaccines.

For decades, Idaho has served as a shining example for the rest of the other 49 states on how to stand up for economic freedom and have a hands-off approach to government’s involvement in business. Let us not turn the tide on that now when we need to stand by those principles the most. We stand with the large majority of Idaho citizens who believe businesses thrive when government stands down.