A Passion for Train Robbing 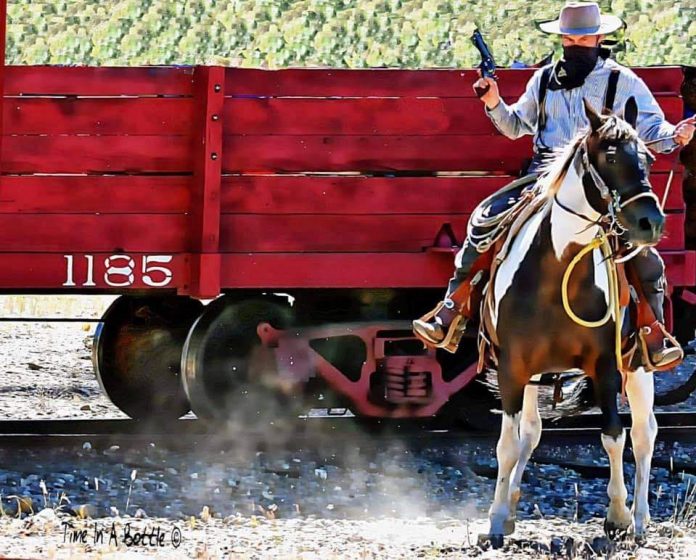 A Passion for Train Robbing

Twenty-nine year old Cody Hoffer was born and raised in Weiser, living here for 19 years.  He is the son of Bud D. Hoffer and Sonia L. Head, brother to Ashley L. Hoffer.  After graduation, he attended TVCC and one semester at the University of Idaho before he came to the conclusion that music wasn’t a reliable source of income.  Trade school became his calling and Hoffer has now been in the HVACR trade for 7 years.  Hoffer and his wife Shawndra were reminiscing one day about a trip on the Thunder Mountain Line he had taken as a kid, which sparked a conversation about Sumpter Valley Railroad.  As a family, they decided to take a trip and experience the Old West.

“We planned and partook in September where we were robbed and introduced to the robbers at our hotel (Sumpter Stockade – Ryan and Laramie Shanks Proprietors) and I was invited to work as ground crew (by Tyler Kennon who is now charged with recruitment of new Bandits) and encouraged to return with a trusty mount,” explained Hoffer.  With a well desensitized horse and a comfortable level of horsemanship, Hoffer decided to give it a try.

“The experience was intense. As ground crew (for the Gold Rush Bandits) you wait out the train’s arrival amidst distant reports of gunfire and steam whistles. You are then stepping out of cover and expected to fire blanks wildly as the train is stopped and eventually the law enforcement surrenders the gold. As part of the mounted robbers you wait for the train to approach the selected crossing and lope through the trees and exchange gunplay with the guards in three different attacks, the third ending in the surrender of the gold. With a familiarity of firearms this is a relatively safe and exhilarating experience,” he shared.

For Hoffer, this experience is much more than a hobby.  It is a passion.  The operation is all volunteer based and is a nonprofit organization.  Folks do this solely for the love of the Old West, which he shares with his daughter Lorelai, and to “instill awe in children who attend for the rugged determination, individualism, and ingenuity of their forefathers.”  Hoffer’s daughter Lorelai is a big fan of old westerns and steam trains, so this experience is a unique way to connect the passions of father and daughter.

The 25-year-old horse he rides in the show is named Flint.  Hoffer has been into horses for only about 6 years.  He spent a 6-mile ride with Flint across the desert, which he said took 3 hours longer than it should have.  “Due to my inexperience, his stubbornness, and my lack of trailer,” he said.  Since then, the two have bonded along with some help from a mentor, Jerry Arlington.  Hoffer described Arlington as “77 years old, tougher than a nickel steak, and meaner than an acre rattlesnake!”  He was pleased to report that Flint behaved wonderfully in their first (but not last!) ride with the Gold Rush Bandits.