Cambridge FFA Banquet 2021 Was A Huge School and Community Event 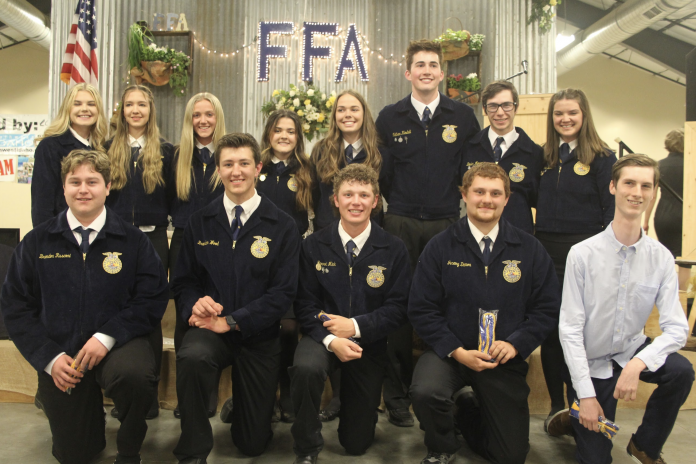 On Tuesday, April 20th, the Cambridge FFA chapter held their annual banquet. There was a great turnout with around 185 guests and FFA members. At the beginning the 2019/2020 chapter officers were introduced and they did their opening ceremonies. After that, our chapter President, Nathan Kindall, gave thanks to all of the community members and supporters for making everything that our chapter does possible, then we enjoyed our delicious meal. The meal was prepared by our local specialists: Seonaid Uebelhardt, Cindy Jones, and Susan Crisp. The meal was served by many of our young future FFA members: Briggs Papineau (3rd) Ridge Loveland (5th), MacKee Nichols (5th), Jack Papineau (5th), Lola Warren (6th), Asher Harley (7th), Wyatt Moura (7th), Quinn Hoskins (7th), Hailey Kindall (7th), Addi Mckee-Barton (7th), Sammy Gressley (7th), Eli Noah (7th), Jace Waggoner (7th), Elias DeVries (7th).

At the very end the 2020/2021 officer team gave closing ceremonies to bring an end to an amazing night.Thank-you to everyone who attended or helped with making this event possible. Special thanks to Roy Braun for taking pictures of the event and for everyone that helped to make the evening run smoothly.