How Walkable Is Weiser? A Two-Day Workshop Examined The City Through The Looking Glass 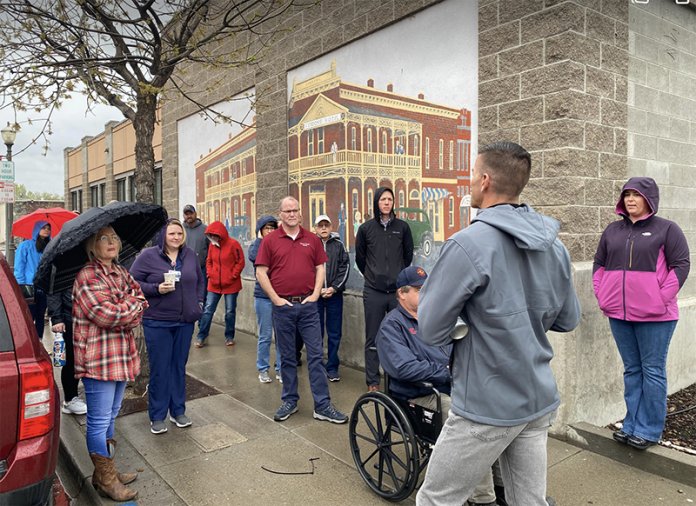 More than 20 people representing the City of Weiser, Southwest District Health, businesses, and local schools gathered in downtown Weiser this week for a two-day workshop on how to make the city safer for people who walk. The workshop, dubbed the Looking Glass Academy, is conducted each year across Idaho to help small towns promote walking as a healthy and safe option for moving around town.

“The goal of the workshop is to build local capacity to improve things like sidewalks, crosswalks, and pathways so people can express their freedom to move about Weiser no matter which mode of transportation they choose,” said Don Kostelec, a transportation planner and designer with the firm Vitruvian Planning out of Boise. “That small gap in a sidewalk, having to cross Highway 95 or the lack of a curb ramp at a corner can discourage people from walking or make parents feel their kid’s walk to school is unsafe.”

Idaho is at a turning point with transportation funding, as a new $10 million Child Pedestrian Safety program was approved this year by the Idaho Legislature as part of Governor Brad Little’s budget. The federal Transportation Alternatives Program, which has been a part of federal transportation bills for nearly three decades, received additional funding with the recent infrastructure package passed by Congress. “The increase in funding opportunities means we can address the imbalance that has occurred in transportation spending in Idaho,” said Kostelec, whose firm was hired by Southwest District Health to conduct the workshop. “We have spent decades building and improving roads with only motor vehicles in mind and the result is people in small Idaho cities can’t even walk safely to a school, park, grocery store, or downtown.”

Beyond infrastructure, the workshop addressed ways in which Weiser can incorporate considerations for walking and bicycling through its ongoing Comprehensive Plan update, as well as making sure policies that set requirements for new developments ensure new sidewalks are built or old sidewalks are replaced.

“Cities in Idaho have so many needs for sidewalks and safer crossings in older parts of town that we don’t need to create the same impediments to freedom of movement when new streets are built,” said Chris Danley of Vitruvian Planning, who created the Looking Glass Academy. “We want people to see their cities through a new lens and realize we shouldn’t feel forced to drive a few blocks to pick up a gallon of milk or get a child from school.”

Tuesday’s all-day session covered topics related to what it means to have only a four foot wide sidewalk that is not wide enough for a family to walk side by side. It also covered the street features that make pedestrians feel safe and comfortable, such as a buffer from moving traffic and frequent crosswalks that don’t require people to walk out of their way to cross a street. The workshop participants took two walks around Weiser on Tuesday, with the first one focusing on downtown and the second walk examining concerns over vehicle speeds and crosswalk safely along State Street. Day two included examining the areas around Pioneer School and Park Intermediate School.

The City’s Street Department staff attended both days and pointed the workshop participants to places they felt were good candidates for making walking safer through treatments such as pedestrian refuge islands on wide streets, such as Main Street and Commerce Street.

“One thing Weiser could do is pass a proclamation and erect signs on major gateways, saying it is the ‘Most Walkable City in Idaho,’” said Danley. “Is it? Probably not; but putting your values front and center helps create the momentum and vision to truly become a more walkable city.”

Vitruvian Planning will be back in Weiser later this summer to help the City pilot things like pedestrian refuge islands, curb extensions, and safer crosswalk markings. “Piloting a project using temporary materials like spray chalk and reflective posts allows a community to test a solution and adjust it before committing to more permanent solutions,” said Danley.