ICAP Announcing Their Primary Legislator For February Is -Abby Lee 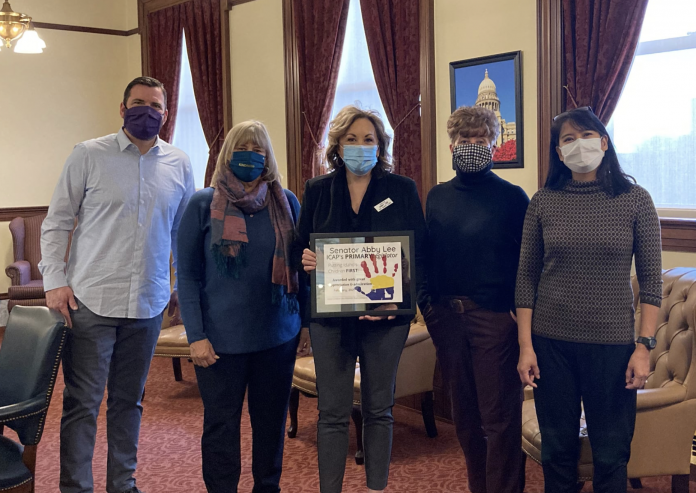 “Recipients of this award are legislators who put children first, which
Senator Lee has done time and again,” says Diane Schwarz, co-founder
of ICAP. Some of Senator Lee’s accomplishments include support of
education funding, support of home visiting programs, sponsoring
legislation that improves foster care and now co-chairing the Child
Protection Oversight Committee, and advancing efforts to reduce the
prevalence of child abuse and neglect.

The future of Idaho’s children depends on the decisions our legislators
are making today, and Senator Lee has all our children on the top of her
agenda. Senator Lee is a true leader on issues that touch all Idaho
families.

Senator Lee was presented the Primary Legislator Award along with a
lunch box including a water bottle and mask, and very practical “school”
supplies to remind us all the importance of putting Idaho’s children first
in policy and legislative initiatives. In her honor, ICAP will donate one
hundred books from Book It Forward! Idaho to Payette Head Start,
which is in Senator Lee’s district.

Senator Lee’s leadership in taking care of our kids in the now, means
better economic growth, more stable communities, and the ability of

Idaho businesses to be competitive in the future. It is more than an
investment in human capital, it is “the right thing to do.”
Idaho Children Are Primary was formed to bring children’s issues to the
forefront of policy and legislative discussions. ICAP represents a diverse
group of Republicans and Democrats, policy makers, business leaders,
educators, and pediatricians. We would like to congratulate Senator
Abby Lee for her diligent efforts over the years to put Idaho’s children
first!