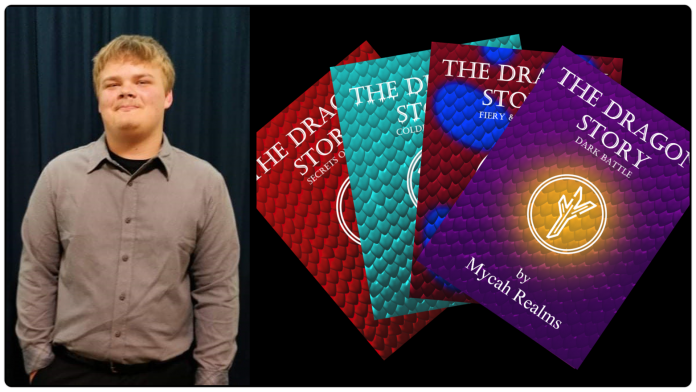 Mycah Realms, real name Austyn Perkins, is a local teen author who was born in Washington and currently resides in Weiser, Idaho where he has been writing since the age of 14.  The fourth and final book in The Dragon Story series is out and Realms is excited to share his fantasy world with his fans.

The last book in the series, called Dark Battle, is dedicated to Sarah Livingston, a good friend of Realms who has helped him throughout the editing process.  “I couldn’t have done it without her.  I also couldn’t have made the series at all without God’s help,” the author shared.

A brief description of the final book:

“The time has come for the Army of Talvazah to finally rise and defeat the evil, wicked Queen Darkness. Jewel was tasked with leading the giant army into the dark battle against Dark Island, but other problems are rising at the same time. She will have to break her bad habit of bossing dragons around if she was going to keep everyone working together. The fate of the fantastic work of Drath is at claw, and only the Darkslayers and the Army of Talvazah can save the world. But can they work together enough to survive all the dangerous Darr Dragons, and the mysteries of Wild Forest?”

For those who have not read the other books in the series, here is a description of the entire series:

“Dragons are the fundamental animals of the world Drath. They rule over it all, and always will. As for the humans, they step back and the dragons conquer. In this new generation book series, you’ll embark on the adventure of a lifetime. The flaming adventure begins in school when a curious Fire Dragon named Glowfire meets a peculiar group of dragons, Jewel, Iceflurry, and Firespark. After their school burns down, he has to choose between staying with his family or going with his new friends on a fantastic journey to save Talvazah. Meanwhile, war continues to spread across the kingdoms, leaving more and more secrets unanswered. Jewel has a plan to save their homeland, but a plan might not be enough, because the evil Queen Darkness is quickly taking over the entire world of Drath, piece by piece… kingdom by kingdom. Will Glowfire and his new friends be able to save their homeland and stop Queen Darkness? Or will they fail like the many dragons before them?”

The series is much more than just a fantasy dragon tale, however.  It’s a story about facing impossible challenges.  It’s about good morals, life lessons, friendship, loyalty, and forgiveness.  This is a series that is sure to be a favorite among young readers, with wholesome lessons mixed in with fantasy and adventure.  Realm’s shared that his beta readers have commented on the book having a complete and solid ending with the possibility of a continued story later.

“I’m kind of sad that the series is ending, it seems like just yesterday I was coming up with the characters for the first time.  But I am very happy with the way it turned out, and it’s only going to grow from here,” he shared.  Readers should be on the lookout for more books by Mycah Realms because he has many new ideas in the works!

Find all of the books in the series on his website at www.mycahrealms.com