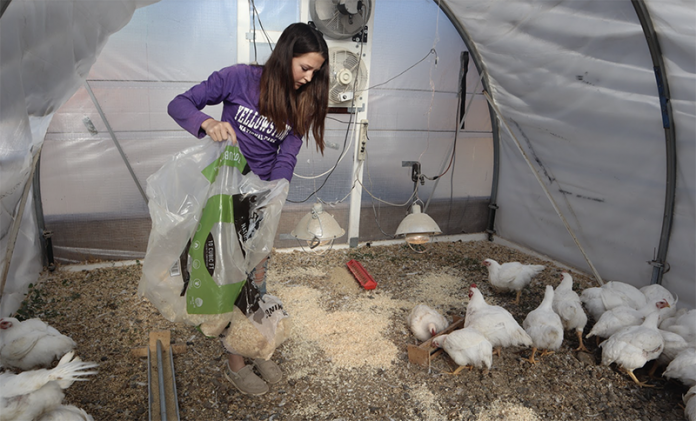 This year, the 7th grade Small Animal Production class at Midvale High School raised chickens  as a class project. This project was started in February and students were involved in the  process from starting the chicks, feeding and watering them, building feeders, cleaning pens  and butchering. They also purchased 25 laying hens (as chicks) which won’t be ready until the  end of school (May 26th), but they plan on selling those as well.  Each 7th grader was asked to  design a flyer and sell 4 chickens for $15/chicken, which are all sold.  The 7th graders have  learned a lot about the responsibilities involved in owning your own farm animals, including  care, record keeping and marketing. Each student also kept records on daily activities, costs of  purchased chicks, feed, miscellaneous supplies, as well as products sold.  They used the FFA  online record book (AET) to keep accurate accounts and journal entries.  This helps them have an understanding of how the program works, to ease the transition into FFA in high school. On the weekends, Mr. Jones (Midvale Ag Teacher) had students take turns caring  for the chickens. Altogether, this project taught them a lot about what it takes to raise and sell animals from start to finish. The students are planning on using the funds generated from the  project to build a more permanent poultry structure to continue raising chickens in the future.