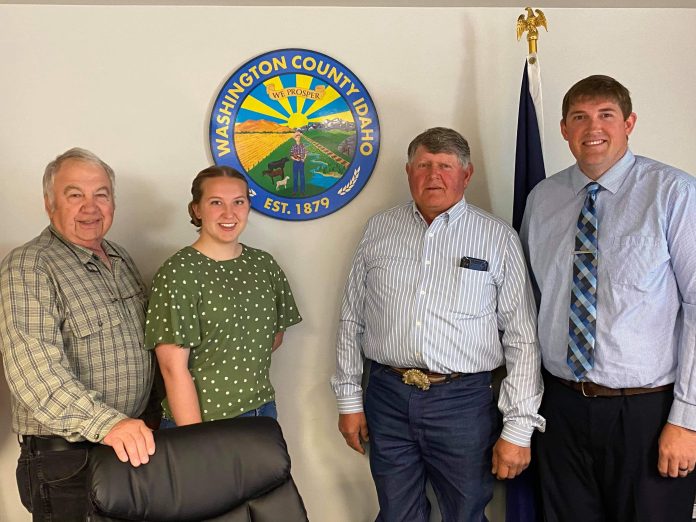 Washington County, Idaho recently adopted a new county seal which grew from the creative mind of 13-year-old Lybee Bell.  Now almost 20 years old, Bell began working on a design for the seal 7 years ago.  County Commissioner Kirk Chandler explained that years ago, commissioners and officials decided the seal at the time was not very representative of our county, so they ran a story in the newspaper asking for community members to come up with some ideas.

As a blossoming artist, Bell painted a design and submitted her work to be considered.  The commissioners and elected officials liked her design the best and decided to work together to do some revisions on Bell’s original design.  Chandler commented that the process was very long due to multiple revisions and changes that were asked to be made.  Sizing and redesigning certain aspects took time and patience.  Two different graphics designers also worked on the project to create a digitized version of the painting.  The graphic designer clarified and brightened colors and added a border to the seal, according to Chandler.

The seal holds symbolic meaning in everything that was included in the image.  The Latin term “Nos Juvat” was used on the old seal, meaning “We Prosper,” and was changed to the English words for the new seal.  The sun in the background is symbolic of the meaning of the word Idaho which means “the sun comes from the mountains.”  In the background, one can view Indianhead Mountain on the left side and Cuddy Mountain on the right.

Farming crops and livestock symbolize the agriculture industry in our county and on the right side a mining shaft can be seen, to symbolize the mining industry, which is what originally brought people to Idaho.  Railroad tracks crossing the land represents the growth and shipping of products through our lands.  If you look closely, you can see the figure holding a fiddle, which of course is a nod to the famous National Oldtime Fiddler’s Contest.  And finally, the Weiser River can also be seen running alongside the tracks, a tribute to the 103-mile-long tributary of the Snake River that runs through Washington County.

Seven years in the making, Washington County finally has a seal we can all be proud of and recognize the beautiful imagery as a representation of what we are all about.  Join us in congratulating Lybee Bell on her incredible accomplishment of designing our county seal!