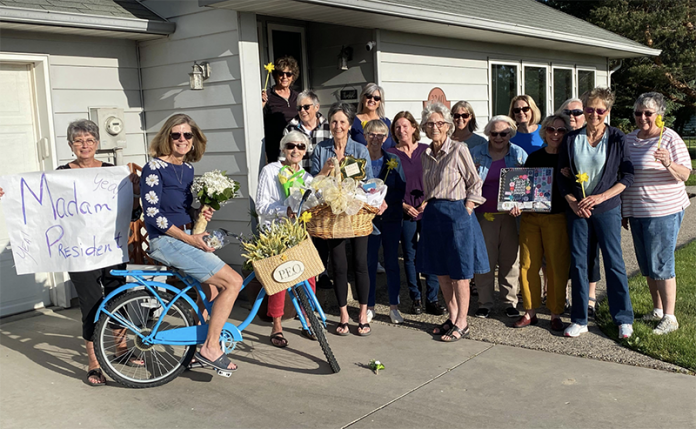 What a racket! Horns honking in celebration as cars passed the home of Kelly Haun. The members of P.E.O. Chapter T were having a car parade and stopping with gifts to give Kelly a great send off to the State Convention where she will be installed as Idaho State President on May 23. Becoming the Idaho State President of P.E.O. required a five-year commitment.

Kelly was first installed as State Treasurer, then moved up each year to the next office until becoming State President. She fulfilled all of her duties each year and has now reached the goal.

The members of Chapter T are very proud of Kelly for all her achievements and dedication to the Sisterhood. Becoming State President is a great honor, preceded by years of hard work and dedication.

P.E.O.’s mission is educating women and we have given out millions of dollars in scholarships. The citizens of Weiser have stepped up many times to help Chapter T with our fundraising efforts. The money collected not only contributes to nationwide scholarships, but also to scholarships for Weiser High School graduating seniors. We have recently added a scholarship to a trade/tech school as well.

Kelly has been very proud to belong to an organization with such idealistic endeavors. Promoting and educating women has been very high on her list of priorities, so becoming State President of P.E.O. is a personal goal and achievement.