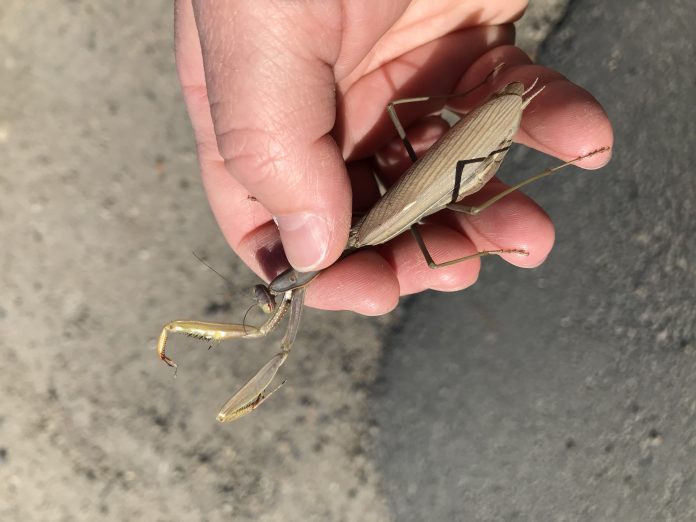 It is a beautiful fall day. The birds are singing, the leaves rustling. Then the rustling gets louder—like someone walking through the leaves. Someone is!
At first glance, it looks like an alien. The head is wedge-shaped with a pair of bulging eyes and a set of mandibles working convulsively. Drawn up beneath its chin, the front legs look more like claws as it rears up on two posterior pairs of legs. The body bulges beneath a pair of wings reminiscent of old-fashioned coat tails. Squish, swat…or not?

The alien is a preying mantis (sometimes praying mantis). They are highly efficient predators that eat a myriad of garden pests during their brief summer life. They will settle down a plant in the garden and wait patiently for other insects to pass. When a victim comes close enough, the mantis lunges forward, seizing its prey in its forelegs where it is pinned and impaled by the tooth-like structures that run down the inside of the legs. The alien-like head can swivel past 180 degrees to allow the insect a sweeping view about itself and facilitate locating prey.

After a summer spent feeding on protein-rich insects, the mantis is ready to start a family. Unfortunately, the female’s appetite for protein has not subsided, and a mantis romance may end grimly with the demise of the male in the mandibles of his lady friend. Eventually, a wiser, speedier male appears, and the female mantis seeks out a sheltered spot to lay its eggs, which it encases it a foam-like structure to insulate and protect them.

Squish, swat, or not? Definitely, not. These odd-looking insects are valuable in the garden as a true-blue organic pest control! Don’t let them worry you. Some people even keep them in tanks for pets!