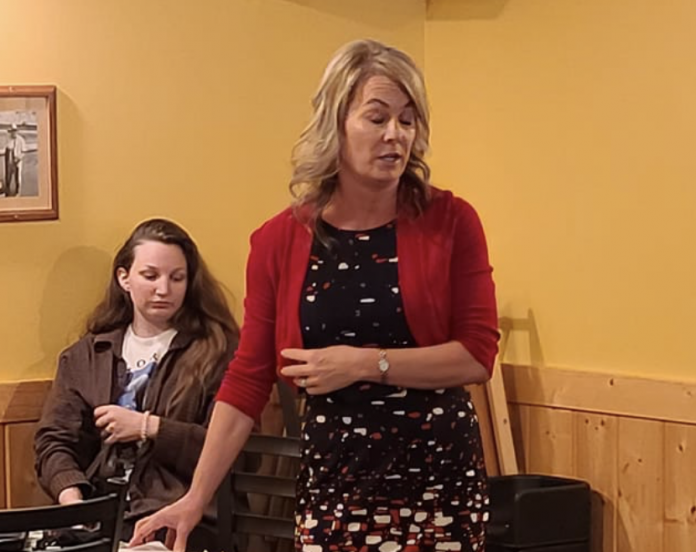 On Thursday, March 19th, the Washington County Federation of Republican Women hosted Superintendent Sherri Ybarra to a lunch and learn at Idaho Pizza.

“I had collected a series of questions for the Superintendent to cover while here and she did a great job of addressing out communities’ questions and concerns during her presentation.”  Margaret Jensen, President of WCFRW, said.

Some of the positive accomplishments that have occurred during her tenure include re-addressing Common Core, Increasing the graduation rate in the HS, Go On rate for HS Seniors, COVID and reopening the schools.

Common Core – When Ybarra came into office 5 years ago, Common Core was already moving forward.  She was an educator and principal in the Mountain Home area for many years and had openly stated that she was never a cheerleader for Common Core, but also noted that the old system was not working either.  So, she and her team are working toward changing the Common Core structure, but at the same time looking at other methods of improving our education system in Idaho.  She has been working with several other states who removed Common Core from their curriculum and is using those connections to come up with a plan that will work for Idaho.  She also stated that Idaho is no longer in the lower end of education and was happy to report that we are in the middle of the pack in our education numbers nationwide.  Would we like to be #1?  Of course, but we have made great strides in a relatively short period of time.

Powerball money – Idaho has opted out of Powerball money, which is roughly $14MM.  She explained that of that $14MM, only about $9MM of it came back to education.  There were a lot of restrictions on how the money was to be used, but essentially it could only be used for structural improvements on buildings that occupied students.  It was not used for classroom supplies, salaries etc.  So, the deficit is in the building funds.  Yes, this will cause some hardships to the districts, and budgeting funds will need to come from other areas.

Graduation rate and “Go On” rates in Idaho have significantly improved.  Weiser graduation rates actually are higher than the state average!  When asked about how these rates were calculated, she stated that they are now looking at students who start the 9th grade and that percentage is factored into the graduation rate.

COVID and schools re-opening – There are still a few school districts around the state that are on-line only, but most of the state has gone back to in-class teaching, with an option for students to be virtual if they wish.  She did not have those statistics, but the number of virtual students is very low compared to those attending in person.  She also noted that the COVID cases in the schools has been very minimal and that the majority of cases did not start or spread in the schools but were brought in as a result outside family gatherings.

Curriculum vs. standards – This question was raised because it was felt that a large part of frustration in the education system stems from people not understanding the difference between Curriculum vs. the standards that need to be met.  Ybarra explained that the state has a certain level of standards that need to be met.  That applies to the whole state.  The curriculum is determined at each district level.  So, if there are questions about the curriculum that is being taught in our schools locally, those should be directed toward our local school boards and administration.  She is a strong proponent of giving the districts the freedom to develop and teach a curriculum that they choose, as long as the students are learning the content necessary to meet the state standards.

If you have any questions for the Superintendent, you are welcome to email her at info@sde.idaho.gov.

Next month, we would like to host our Superintendent, Wade Wilson, for a discussion about Weiser Schools and what we are doing here.  He has agreed that he would welcome the opportunity to visit with the community about any questions, concerns etc. that you may have.

The Washington County Federation of Republican Women meet the 3rd Thursday of every month at 1 PM at Idaho Pizza.  If you would like more information on how to join, or would like to attend a meeting, please email me at muggsy_jensen@msn.com.