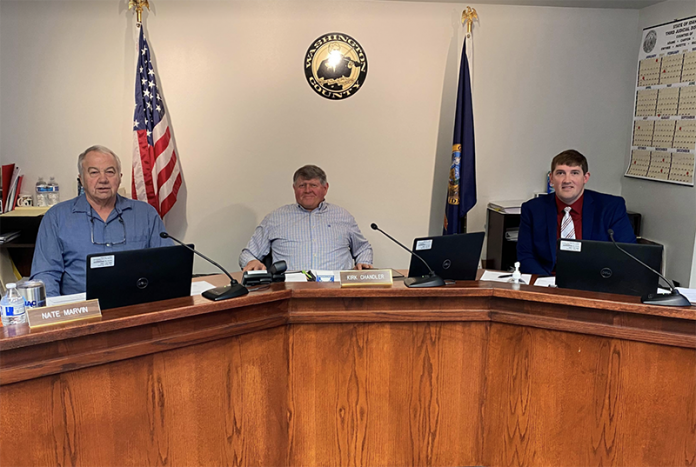 The Board of County Commissioners of Washington County, Idaho, does hereby meet this 11th day of January 2021.

IN THE MATTER OF CORRESPONDENCE/MEETINGS AND REPORTS)
Correspondence received by the Board was reviewed and disseminated as required. Kirk Chandler moved, seconded by Nate Marvin, to approve demand warrant to be issued to NAPA Auto Parts in the amount of $1,492.25. Motion carried.
Kirk Chandler moved, seconded by Nate Marvin, to approve the extension of the Families First Coronavirus Act benefits from December 30, 2020 through March 31, 2021, Motion carried.
Mike Stender informed the Board that the transmission went out of the Ford F150 Building and Grounds pickup. Stander stated the transmission could be rebuilt for approximately $2,900.00 plus the cost of oil.
Nate Marvin moved, seconded by Kirk Chandler, to approve the expense to rebuild the transmission for the building and grounds pickup. Motion carried.

IN THE MATTER OF MINUTES)
The minutes of the Board not heretofore approved of January 4, 2021 were approved as written.

IN THE MATTER OF CLAIMS)
The claims, audited by the Auditor, were presented and reviewed by the Board. All credit card claims were reviewed.
The Auditor was authorized to issue warrants totaling $121,610.13 for general expenses by a motion of Nate Marvin, seconded by Kirk Chandler. Motion carried.

IN THE MATTER OF OATH OF OFFICE/NOMINATION OF CHAIRMAN/BOARD
DESIGNATION)
Members of the public present were Mary Sue Roach, Robert Patrick, Stacy, Alden, Collyn, and Olivia Haines, Carol Stuart, Arline Davis, Susan, Hannah, Hayden and Cody Samson, Johnny Stuart, Thomas Borda, Sarah Stuart, and John Stuart. Washington County Clerk, Donna Atwood, administered the Oath of Office to Nate Marvin, Commissioner, Lyndon Haines, Commissioner, Matt Thomas, Sheriff, and Delton Walker, Prosecuting Attorney.
Lyndon Haines moved to nominate Nate Marvin as Washington County Commissioner
Chairman. Nate Marvin seconded the motion.
Donna Atwood, Clerk, called roll call vote: Lyndon Haines, Aye; Kirk Chandler, Abstain; and Nate Marvin, Aye. Motion carried.
The Board discussed appointment to County Boards and Commissions. Nate Marvin will be the liaison on the Fair Board; Area Agency on Aging; Orchard Review Board; and WICAP. Kirk Chandler will be the liaison to the Soil Conservation District Board; The District Magistrate Commission; and the Animal Damage Control Board. Lyndon Haines will be the liaison to the Washington County Weed Board; the Rodent Control Board; the Weiser Economic Development Committee; the Southwest District Health Board; Snake River Economic Development Alliance; and the Waterways Board. Haines was also appointed as the Secretary/Treasurer for the District III Elected Officials.
The Board requested an updated list of members of various Boards within the County.
Nate Marvin moved that the Board not meet on the fifth Monday of any month unless County business needs to be addressed. The motion was seconded by Lyndon Haines. Motion carried.
The Board discussed the meeting schedule of county departments. The Board agreed to meet with Department Heads monthly. Road and Bridge and Planning and Zoning will continue to meet with the Board weekly. Departments can cancel if there are no items to report to the Board.

IN THE MATTER OF EMERGENCY MANAGEMENT)
Tony Buthman, Emergency Manager, met with the Board. Buthman reported that the current snow pack is at 81%. Buthman informed the Board that the permit for the boat ramp in Midvale has been extended for an additional year. Buthman discussed the distribution of COVID-19 vaccine. Buthman informed the Board he is continuing to help distribute PPE (Personal Protective Equipment) to care facilities, county offices and the Ambulance District.
Buthman updated the Board on presentations and training that he plans to hold in the future.
Buthman reported that Christian Ramirez with the Forest Service had reached out to him regarding a Community Mitigation Assistance Team which is planned to help mitigate against wildfires.

IN THE MATTER OF JUVENILE PROBATION)
Dahlia Stender, Juvenile Probation Supervisor, met with the Board. Stender provided a brief summary of funding provided to Juvenile Probation programs to the Board.
Stender gave a department update and informed the Board there are three juveniles currently in state custody. Stender reported there are nine juveniles currently participating in community service programs.
Trainings and meetings are continuing to be held via Zoom or through other virtual meetings. Stender informed the Board that she will be participating in probation reviews in Madison and Bingham Counties this week.

IN THE MATTER OF PROSECUTING ATTORNEY)
Delton Walker, Prosecuting Attorney, met with the Board.
Donna Atwood, Washington County Clerk, addressed the group. Atwood stated she had requested that Sheriff, Matt Thomas, Road and Bridge Supervisor, Jerod Odoms, and Weed Superintendent, Bonnie Davis, to submit letters concerning the unfunded mandates that the county is required to provide through taxpayer dollars. Atwood also discussed an email from the Idaho Association of Counties that encourages counties to draft a resolution regarding unfunded mandates.
Walker stated there has been discussion of more unfunded mandates being pushed to the counties.
Nate Marvin moved, seconded by Kirk Chandler, to draft a resolution regarding unfunded mandates. Motion carried.
The letters from the departments will be submitted to Representatives, Kerby and Boyle as well as Senator, Abby Lee.

Chandler discussed persons who have purchased property from Warren Sheppard and the ability to build on property that was not allowed a building permit.
Walker stated each piece of property would need to be researched to determine what was allowed under the original parcel rule. There is an exception for a mother-in-law quarters.
Marvin stated he would request that Planning and Zoning report to the Board next week.

IN THE MATTER OF AMBULANCE)
Nate Marvin moved, seconded by Lyndon Haines to recess as the Board of Washington County Commissioners and convene as the Board of the Weiser Ambulance District. Motion carried unanimous.
Debbie Warren, Deputy Clerk, called roll call: Lyndon Haines, present; Kirk Chandler, present; and Nate Marvin, present.
Luke Smith, Ambulance District Director, met with the Board. Also present was Ambulance District Administrative Advisor, Tim Atwood.
Order No. 21-11 for general expenses in the amount of $26,359.06 were presented to the Board for review.
Smith discussed the billing contract with Systems Design West. Smith requested the Board designate an additional contact person in the event that Smith is unavailable.
Chandler moved to change the signature card with Columbia Bank for the Weiser Ambulance District to show Nate Marvin as the Chairman and Luke Smith as the Ambulance Director. The motion was seconded by Lyndon Haines. Motion carried. Chandler amended the motion to remove Corey Patocka from the signature card. Lyndon Haines seconded the motion with all in favor. Kirk Chandler will remain on the signature card.
Smith reported the Ambulance District had eighteen calls for service last week that included three transfers, two refusals for care, lift assists, and one rendezvous. Smith informed the Board he and Atwood have discussed staff training and will review precautions that will need to be in place in order to move forward with training.
Smith stated the new billing system would be in place on February 1, 2021. Smith discussed the need of allowing Systems Design West to make direct deposits on behalf of the Ambulance District.

IN THE MATTER OF SOCIAL SERVICES)
Maria McConnell, Deputy Clerk, met with the Board.
Nate Marvin moved, seconded by Lyndon Haines to go into executive session at 11:46 a.m. in accordance with I.C. 74-206(1) (d) to consider records that are exempt from disclosure as provided in chapter 3, title 9, Idaho Code. Motion carried unanimous. Lyndon Haines, Aye; Kirk Chandler, Aye; Nate Marvin, Aye.
Nate Marvin stated they were out of executive session at 11:49 a.m.
Lyndon Haines moved, seconded by Kirk Chandler, to approve the final determination of denial of County assistance on Case No. 2020-19. Motion carried.

IN THE MATTER OF WEISER MEMORIAL HOSPITAL CONSTRUCTION
UPDATE)
David Belford met with the Board. Belford reported he is working on a property description survey to be presented to the title company. Belford requested permission to use the property by the ambulance hall as a staging area when construction begins.
Nate Marvin moved, seconded by Lyndon Haines, to allow the hospital to use the property south of the Ambulance Hall as a staging area during construction.

Chairman, Board of County Commissioners

A full audio recording of the Commissioner Meeting is available at the Clerk’s Office upon request.