Around Midvale by Elsie Coburn 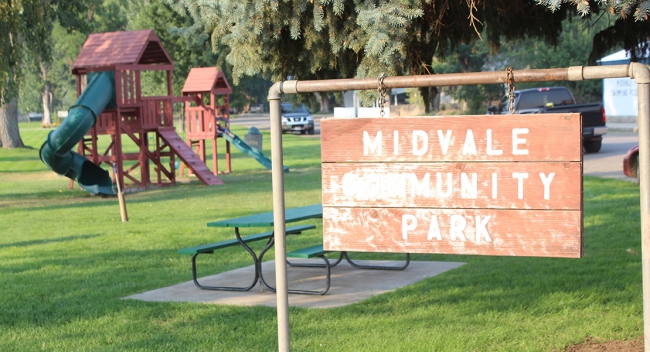 Fall Art Show at the Midvale Mercantile on November 19 was a huge success! The room was filled with 70 or more adults and children throughout the evening, And Lois Sutton filled up the remaining space with beautiful, peppy piano music, inspiring a few folks to execute some quick dance steps.

Many thanks to the Lions Club who furnished the delicious appetizers and everyone who helped donate the $405 for their Christmas projects. And Elsa adds a huge thank you to Don Dopf who donated the lovely posters advertising the event.

The artists were the stars of the night, and your reporter enjoyed getting their comments about
the event.  Pau Evans! who had a set up a beautiful display of his western theme furniture etc. (wife Phyllis was relaxing in one of the chairs) said, “It has been a fantastical evening!”

Wilfred Fox remarked, “I didn’t know there are this many people alive in Midvale!” He had a display of his amazing Intarsia wooden art and was tired after selling 10 pieces at the Cambridge Art and Craft sale the previous weekend.  Plus orders for three more, “If I live that long!”

Dwight Towell and Brian Hochstrat joined forces and displayed their amazing knives and Brian’s saddle and tack together. Dwight commented, “This is a nice show. It’s the most culture we’ve ever had in Midvale!” Brian, a man of few words, said that he had a good time.

Jodi Doggett, who displayed an impressive gallery of beautiful outdoors photographs, remarked that “The art show turned out great!”

Barbara Watkins of Mann Creek displayed her lovely watercolor paintings, the highlight being three horses in full stride. “This was a nice little show. I enjoyed meeting new people who were having a good time.”

Kaye York’s beautiful display of paintings included one that featured Elliott Tiedemann, his horse and his dog. Kaye had to leave early because her husband had double knee surgery just a few days before.

Jack Coburn showed four carved ducks in front of the mural he had painted. The mural took 42 hours, beginning the last week of August and was completed on October 13. A sign in front of the mural declared, “Thank you Jack Coburn for the wonderful mural he painted in our building. We are honored. Lane and Elsa.” Jack adds, “I was able to see a lot of people and received good input about the mural. Also, I found a buyer for the pintail duck!”

The Community Harvest Dinner, hosted by the Midvale Churches on November 8 in the Midvale School Multi-Purpose Room drew a crowd that was estimated at 170 plus.  And they were not disappointed, with ham, turkey and the trimmings and a bounty of salads and desserts brought by the guests.

Seen and heard during the dinner…Peggy and Rolly Tiedemann introduced her sister Lynn Jones who recently moved in with them and is doing much better after two years of recovering from a brain injury. Welcome to Midvale, Lynn!

Grandma Sarah Mikek was enjoying having two their grandchildren with her; Emma almost 6 and Lyla age 2.  One-year-old  Naomi stayed  home. Sarah reports that Savannah and Isaac are tired of all that cold and snow in Alaska and will go on a cruise to the Bahamas in February. Grandma and Grandpa will take care of one-year-old Annie, who is proficient in sign language which they will be learning!

Two families, the Ericksons and Shermans, were awaiting word of soon-to-arrive grand-babies.

Overheard…the quote of the day, “Jack Wright has a vast knowledge of misinformation!”  Fortunately, I can’t remember who to attribute this to!”

Then on Saturday, December 5, the guys and gals will play four games versus Rimrock in Midvale starting at 1:00 pm.

Friday, December 11, the boys and girls’ basketball teams will play three games with Horseshoe Bend at Midvale starting at 4:30.

Looking ahead, the annual School Music Program is scheduled for December 16 at 7:00 pm.

The first semester ends on December 17.

Double Feature Drama coming to Midvale School’s Multi-Purpose Room on ‘Wednesday, December 9 at 7:00 pm. The first play, “The Gold Rush and the Town of Shimmering Heights,” will be presented by the sixth grade and is set in the Idaho Territory during the 1860s to 1900s.  The second play will be put on by the Junior High and High School drama class and is titled, “Super Heroes Coming to the Doctor for Help.”  Donations will be accepted to help cover their costs.

Pow-Wow… Mrs. DeVries’ fourth and fifth graders held their annual pow-wow in their classroom on Thursday, November 19, before an appreciative audience of parents, grandparents and siblings. The scene included a big Teepee, a camp fire and other realistic props.  Mrs. DeVries began the program
by giving credit to Mrs. Holmes, who was a part of the audience this year and who developed the pow-wow over the years. Mrs. DeVries  explained that the fourth grade studied the Idaho Indians while the fifth grade concentrated on the American
Indians. Each student wrote a report which was then edited one-on-one with her and Mrs. Atnip, “A lot of work for them!”

The audience always leaves with interesting information concerning our native population, including teepee history and good manners, chores performed by the women and a hunting ceremony, ending with a buffalo hunt, It was fun to watch the reaction of the
little brothers and sisters, especially Clayton Boyle who was beaming from ear-to-ear as he watched big brother Tyler perform.

Coburns’ Thanksgiving Surprise! Jack woke me at 2:00 am with the announcement that he was having a heart attack. Now that is a definite “waker upper.” After a quick trip to the Weiser Hospital E.R., he was diagnosed tentatively with gall bladder issues.  He was then transferred to the Nampa hospital by ambulance.  On Black Friday they removed his gall bladder via micro surgery.  He is home and doing well.